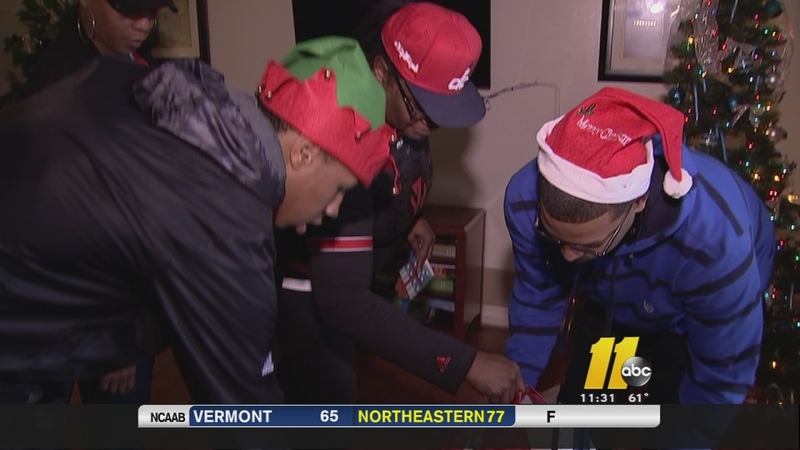 John Wall is living the dream as an NBA superstar. He'll never want for anything ever again. More importantly though, Wall has also never forgotten the often bumpy road he traveled before the big time.

Through his family foundation, Wall is hoping to ease the way for countless families in need. Today, that meant providing a Christmas.
Stacey Quay will be the first to tell you she's no basketball fan -- or she wasn't anyway. That may have changed with one phone call recently.

"I was actually shopping for Ian when Kendrick called me and told me what was happening," Quay said. "And I cried because I couldn't do this, and I'm grateful."

Life hasn't been easy. Quay rescued herself and her two children earlier this year, leaving her abusive husband of 19 years. Eleven-year-old Ian, who is autistic, was often on the wrong end of his father's anger. He now lives in an area group home. And it's been an incredible help.

"He used to act out and be violent and he's calm and he's able to go to school for a full day," Quay said. "He is able to use the bathroom without accidents. He's eating better, he's drinking better, he's just functioning better."

Quay is doing her best to make ends meet. But Christmas wasn't going to be a reality. That's when the John Wall Family Foundation stepped in.
"It feels great to give back. Just to help others who can't help themselves or just need a little push," said Tonya Henry, Walls's older sister.

Wall and his family are motivated by recent and still very vivid memories of struggle themselves. Before John became an NBA superstar, they were often a family in need.

"We've actually experienced what they're experiencing. For my mom to be a single mom with three kids to work as many jobs as she did to make sure that we had everything that we needed," Henry said. "There was times that we didn't see her for days because she was working, but she did what she had to do. So for us to give back, it means a lot."

Helping to deliver the presents Tuesday were members of Wall's sponsored AAU basketball team. Coby White is a top sophomore prospect, but he was learning bigger lessons today.

"That it's not all about me," White said "It's always good to help somebody else that's in need."

Henry added: "The smiles, just the joy of the kids being able to smile and say, 'I had a Christmas also.' "

"This means more than you could possibly know," Quay said. "Just by reaching out."