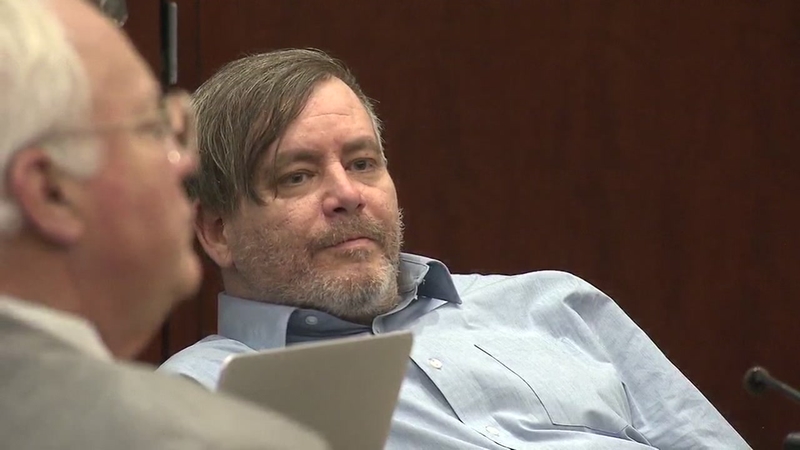 Sander gets emotional as letters from children read

RALEIGH, N.C. (WTVD) -- Convicted murderer Jonathan Sander broke down in tears Thursday for the first time in his trial.

Sander stayed stoic when prosecutors revealed gruesome crime scene photos of his three murdered neighbors. He didn't flinch when the jury unanimously convicted him of those murders.

What did bring him to tears? Letters from his children.

Convicted murderer Jonathan Sander broke down in tears Thursday for the first time in his trial.

Earlier in the trial, Sander had several outbursts and has been physically restrained during most of the proceedings after an incident on the first day of trial. But when letters from his children were read aloud, the stoic anger melted away.

'Hey dad. I really, really love you. I also missing you. I miss you every day,' said one.

For the first time - we are seeing Jon Sander breaking down. He started crying as his partner of 19 years is on the stand reading letters from their children. #ABC11 pic.twitter.com/P2GVl0mefc

A deputy eventually came over and handed tissues to a shackled Sander.

On Monday, when he was convicted of murdering the three Mazzella family members, he just stared straight ahead.

As one victim's distraught relatives were leaving the courtroom, Sander began taunting that family member.

Sander yelled, "See you soon Sal, have a nice day."

The incident happened when the jury was out of the room.

The prosecution played a video of the interaction and said it shows Sander is a calculating individual.

"My position is he knows what he's doing when he's doing it," said Prosecutor Melanie Shekita. "This is not a man who can't control his emotions and actions. He chooses when to do so."

Closing arguments will begin Friday. The jury is expected to get the case thereafter and start deliberating.

If Sander gets the death penalty, he will be the second person to receive the sentence in Wake County within the last decade. On March 4, Seaga Gillard was convicted of first-degree murder in the deaths of April Lynn Holland, who was pregnant, and Dwayne Garvey.

See stories below for a look back at Sander's trial:
Monday, March 25: Sander has to be escorted out of the courtroom following a dramatic outburst.
Tuesday, March 26: Jurors heard 911 calls from the night of the murders
Wednesday, March 27: Dashcam audio recorded Sander saying he was 'a dead man' shortly after the murders
Thursday, March 28: Jurors see gruesome but critical evidence in the case
Friday, March 29: Tears fell as witnesses and friends testified about the victims of the murders
Monday, April 1, childhood trauma experts testified that Mazzellases' daughter, who was 14 at the time of the killings and is now 17, reported in the days before the crime that Sander had molested her. The experts said the daughter had been diagnosed with post-traumatic stress disorder (PTSD).
Tuesday, April 2, a bevy of witnesses testified about Sander's drinking habits, relationship with the victims, and his actions the days before the murders.
Wednesday, April 3, prosecutors unleashed their strongest piece of evidence yet: Sander himself confessing to the murders.
Thursday, April 4, prosecutors finished playing Sander's confession tape and wrapped up their case; Sander's defense team started calling witnesses
Friday, April 5, Sander's defense team called several witnesses--including Sander's wife--to speak to Sander's state of mind at the time of the murders.Sander himself did not testify as was previously thought.
Report a correction or typo
Related topics:
wake countywake foresttrialtriple shootingmurdercourthomicidedeath penalty
Copyright © 2022 WTVD-TV. All Rights Reserved.
TOP STORIES
Wake County Sheriff Baker going into runoff election
NC Primary Election: Live updating results
Madison Cawthorn concedes primary to Chuck Edwards
Budd, Beasley win to set up Senate showdown in November
Fayetteville woman found murdered was pregnant, family members say
Will property taxes rise? Raleigh council discusses $1.14B budget
Wounded U.S. veteran receives mortgage-free home
Show More
NY teen found dead in SC after 13 years; Sex offender charged
Voting goes 'smoothly' across NC on primary election day
Durham voters turnout on Primary Election day
Former UNC player Ademola Okulaja dies at 46
Congress dives into UFOs, but no signs of extraterrestrials
More TOP STORIES News