'It's my life involved:' Jon Sander defends sentencing outburst before judge removes him 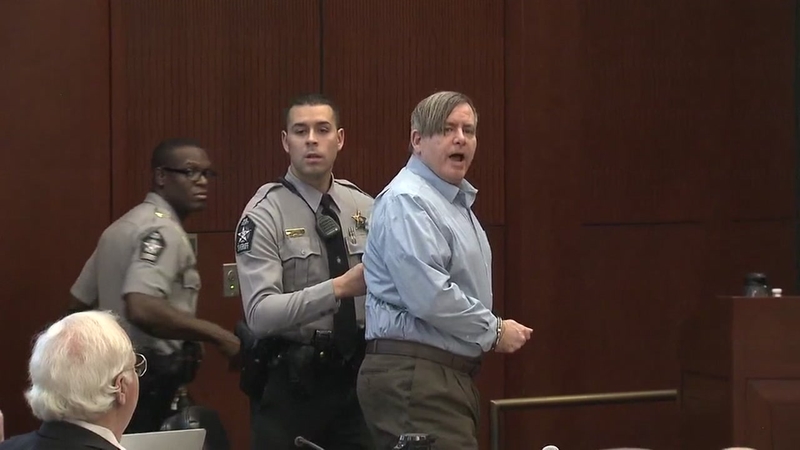 Another outburst by Sander in courtroom

RALEIGH, N.C. (WTVD) -- Convicted murderer Jonathan Sander had to be removed from court again after another outburst.

Sander was convicted April 8 of killing three of his former friends and neighbors in March 2016.

Since then jurors have been hearing more evidence before they suggest a punishment for his actions.

Closing arguments started Friday, but Sander did not make it through them without getting in trouble.

Convicted murderer Jonathan Sander had to be removed from court again after another outburst.

"There was no blood on the wound. It's a fact," Sander said.

When the judge reprimanded him, Sander shot back.

"It's my life involved. I was framed."

That's when the judge ordered Sander be removed from the courtroom. At that pronouncement, applause erupted from the gallery.

"Hey stop it!" the judge yelled at the gallery.

When everything settled down the judge threatened the gallery against any more outbursts.

"If I hear another outburst from the gallery like I heard last time, I'll remove you from the courtroom. But you're going to be going through that door, because I will hold you in contempt. I will not hesitate to do it. I don't care who you are or what your status is, decorum needs to be maintained in this courtroom," the judge said before allowing closing arguments to resume.

The prosecution did not deny during closing arguments the defendant suffers from mental illness, but said that's not a justification for what happened to his victims.

"The death penalty is extraordinary punishment. It is reserved for extraordinary crimes," said prosecutor Melanie Shekita, while also describing the injuries 74-year-old Elaine Mazzella sustained. "He shot her so close and with such force, her teeth went across the kitchen. That's egregious."

The defense is trying to get Sander's life spared and says he suffered from bipolar disorder.

"It is clear that he has had, since late adolescence, a lifelong mental illness," said attorney Tommy Manning. "What he did in the house was rage and it's awful . . . a perfect storm of factors that lead to this tragedy."

All week, attorneys have presented evidence that the jury will consider when deciding if Sander will receive the death penalty.

One piece of evidence actually brought Sander to tears, after weeks of him showing no emotion except anger. That evidence was letters from his children saying that they love him and miss him very much.

If Sander is sentenced to death, he will be the second Wake County man to be sentenced to death in 2019. However, North Carolina has not gone through with executing an inmate since Samuel Flippin in Aug. 18, 2006.
See stories below for a look back at Sander's trial:
Monday, March 25: Sander has to be escorted out of the courtroom following a dramatic outburst.
Tuesday, March 26: Jurors heard 911 calls from the night of the murders