'He was afraid for his life:' Triple murder trial wraps week with emotional testimony 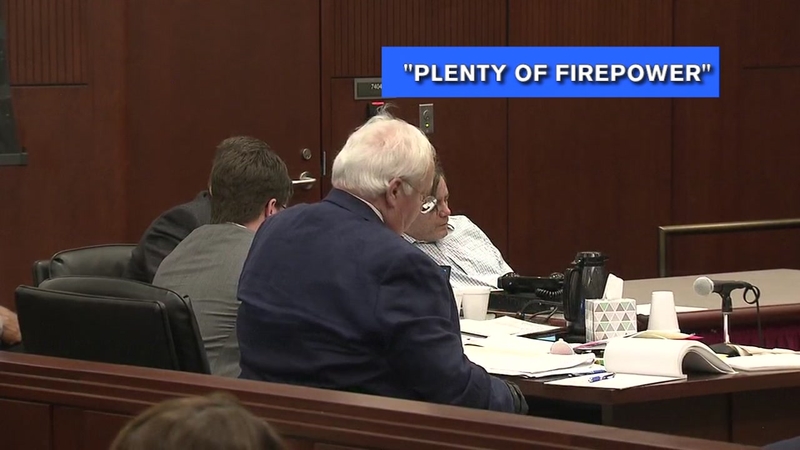 RALEIGH, N.C. (WTVD) -- Testimony continued Friday in the trial of a Wake County man accused of shooting and killing his three neighbors.

"He was afraid for his life."

The testimony came during the fifth day of the capital triple murder trial.

Jonathan Sander is accused of shooting and killing Sandy Mazzella, 47, Stephanie Ann Mazzella, 43, and Elaine Toby Mazzella, 76, on March 25, 2016, at a home near Wake Forest.

A man who had a business relationship with Sandy Mazzella got choked up when testifying about a conversation a month before the murders.

Bob Rollar had worked with Mazzella to market his landscaping business.

He described Mazella as "gentle" and in time got to know him and his wife, Stephanie, on a more personal level.

But he said he seemed to lose touch with them in the summer of 2015. Others have testified that was when the relationship between Mazzella and Sander began to sour.

Sander's family and the Mazzella family had been close friends, business partners, and next-door neighbors for years. But the situation erupted in violence in March 2016 when investigators say Sander went next door with a shotgun and killed Mazzella, his wife and mother.

On Friday, Rollar said he was surprised by a visit from Sandy Mazzella a month before the killings.

"Out of the blue, he showed up at my front porch and he was extremely distraught," Rollar testified. "He was crying. And (choking up) he was telling me that he was afraid. He was afraid for his life."
Attorneys for Sander pressed their case, questioning friends of the victims about texts potentially threatening violence sent by one of the victims.

The defense made the case that the tension was mounting -- tension that may have caused Sander to -- as one officer said he put it - "snap."

Sander ended the week by remaining calm after he was ejected from the courtroom for an outburst Monday. On Friday, he listened quietly as people he knows came to the stand.

The defense pointed out texts from Sandy Mazzella in February 2016.

The texts said Mazzella had a gun and would put Sander "Six feet under" and "take him out" and that he would "leave in a body bag."

Rollar said he dismissed the comments as hyperbole.

"It would've been really hard for me to fathom that Sandy would hurt anybody," Rollar said. "I think that Sandy was just being a little bit boastful. He was very gentle. So, you know, when he wrote that I really didn't take it seriously. I didn't think that he would ever do anything."

After Rollar's testimony, the prosecution called a series of technical experts in firearms examination, DNA and blood chemistry.

One of those experts said he found gunshot particles on Sander's right hand.

The trial resumes at 9:30 Monday morning. It is expected to continue through midweek.

The prior day's testimony was critical for prosecutors but gruesome for jurors.

Jurors had to view diagrams and photographs while a crime scene investigator guided them through the bloody aftermath of the triple murder.

Testimony on Wednesday included dash cam audio where Sander told investigators he was "a dead man" and testimony about the shotgun investigators said Sander used to commit the murders.

Tuesday was more subdued, as prosecutors played 911 calls from the night of the crime.

The trial began Monday and was marked by a dramatic courtroom outburst .