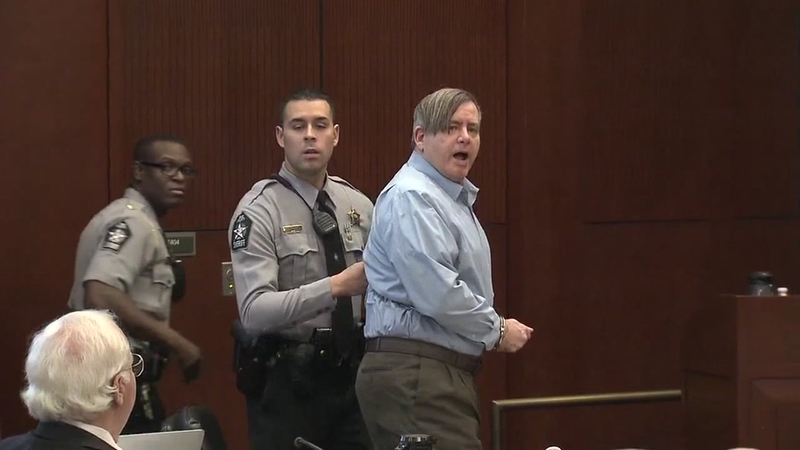 Sander has another outburst in courtroom

RALEIGH, N.C. (WTVD) -- The orphaned daughter of a Wake County couple who died in a triple homicide blames herself for her parents' death.

That was the heartbreaking testimony Monday during the capital murder trial of Jon Sander.

Sander is accused of the shotgun slayings of his next-door neighbor Sandy Mazzella, Mazzella's wife, Stephenie, and Mazzella's mother, Elaine, in March 2016.

The Mazzella and Sander families had been close friends and business partners for years but testimony in the first week of the trial showed that their business and personal relationships began to deteriorate in the months before the killings.

On Monday, two women who are experts at interviewing children involved in crimes testified for the prosecution.

It was noted that the Mazzellas' daughter, who was 14 at the time of the killings and is now 17, had reported in the days before the crime that Sander had molested her.

Tabitha Westbrook, a licensed counselor, was telling jurors about her diagnosis of the daughter for post-traumatic stress disorder or PTSD.

When the judge realized that one element of that diagnosis is self-blame, he sent jurors out of the courtroom.

He then warned the prosecutor that she should avoid the sexual assault allegations during questioning.

Superior Court Judge Graham Shirley said the witness "...can say she meets the criteria for this, but I'm not going to let her testify at this point that she (the daughter) blames herself for the event that occurred."

But on cross-examination, defense attorney Tom Manning brought up the sex allegations.

He asked Westbrook if the daughter, "...has discussed with you some type of sexual assault or some type of touching by Jon Sander?"

Westbrook answered, "I did not testify to that earlier, but she had reported that to me."

So when lead prosecutor Melanie Shakita followed up, she apparently believed the defense question allowed her to inquire about the child's allegations and the self-blame component of PTSD.

Westbrook responded, "One of the criteria for PTSD is self-blame. And (child's name redacted) has told me in session that she blames herself for the death of her parents because she told..."

The judge interrupted and sent the jury out of the room.

Testimony resumes Monday in the trial of a Wake County man accused of shooting and killing his three neighbors in 2016.

But he ended up overruling the defense objection and did not instruct jurors to disregard the testimony.

Earlier in the day, the prosecution planned to play a video of an interview done with that same child by the director of an agency called SAFEchild.

The interview was done a few days after the killings of the girl's parents and grandmother.

But when the judge looked at the transcript, he ordered at least one passage in the video be edited out before it was shown to jurors.

"She says, 'Yeah, I hope he gets the death penalty, he deserves it, don't you think?' I mean, how is that relevant? I mean, that's not corroborating anything she said and would be highly prejudicial," Shirley said.

The trial ended for the day with a digital forensics expert on the stand.

His testimony about text messages and voicemails on the cell phones of the victims and suspect will continue when the trial resumes at 9:30 Tuesday morning.