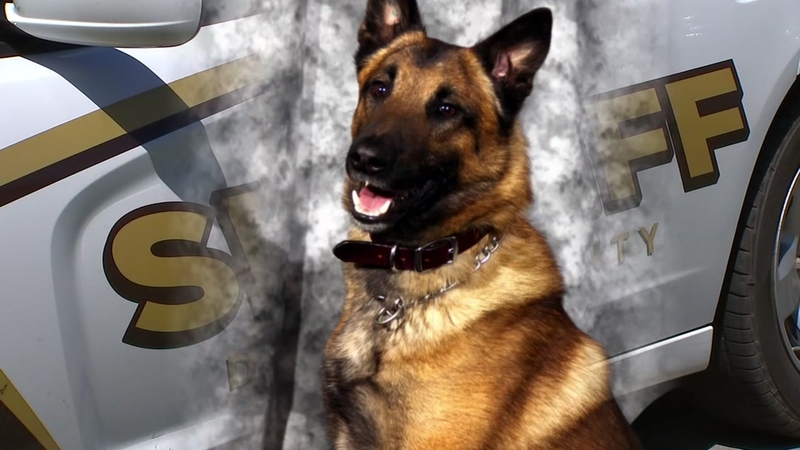 DURHAM, N.C. (WTVD) -- The Durham County Sheriff's Office has changed their handling policies after a K-9 died in a hot car last summer.

The incident, which was not initially released by the department, was first uncovered in an article by our news gathering partners at the News & Observer.

In a statement to ABC11, a Durham County Sheriff's Office spokesperson wrote:

"On July 11th of 2018, Deputy Peter Lilje was taking part in a training exercise with his canine "Max." Max was in Deputy Lilje's patrol unit during a portion of the training. The patrol unit is equipped with safety measures that activate when the temperature in the vehicle rises above a set degree. Deputy Lilje returned to his patrol vehicle and found that the temperature inside was above the threshold for the safety measures to activate. Max was deceased as a result. An internal investigation was initiated into the incident. On October 2, 2018, Deputy Lilje was suspended without pay and removed from the Durham County Sheriff's Office Canine Program."

The technology is a thermostat inside the car. When the inside temperature hits a specific degree, it turns on fans to expel hot air from the car, rolls down the windows, and honks the vehicle's horn.

Durham County deputies said Max was the only K-9 to die in a hot car.

Max was a 9-year-old Belgian Malinois who had been with the department for seven years.

During the entirety of his tenure, Deputy Lilje was his handler, and there was no history of abuse. Following an internal investigation, Deputy Lilje was suspended for three days without pay and removed from the Durham County Sheriff's Office Canine Program.

"The department's going to support him. We're going to support them. But to just keep his head up and don't automatically think that he's a not a good handler..he's not fit to have a dog. You know accidents happen - we've worked with this company for a while, and they're one of the best departments we've worked with - their training is phenomenal," said Michael Beaulieu, a trainer with Ventosa Kennels, the company that provided Max to DCSO.

Following the incident, the department sent out a memo with updated procedures for K-9's.

1. If the K-9 is going to be in an unattended Sheriff's Office Vehicle the K-9 handler or another Deputy will check on the welfare of the K-9 every 20 minutes.

2. If the K-9 handler is in the Courthouse or performing the security function at the front door of the Detention Facility the K-9 must be placed into the K-9 kennels located in the secured section at the rear of the Durham County Courthouse, handlers will ensure the K-9's have adequate water available while in the kennels.

"It's heartbreaking because I do remember the dog, it was a good dog. The handler's a very good handler, and it's just heartbreaking," said Beaulieu, who encouraged K-9 handlers to test the temperature technology when possible.

According to a study by San Francisco State University, the interior air temperature of a vehicle can be 19 degrees warmer than the outside air temperature after just 10 minutes.

Since Max's death, two K-9's have retired, and a new K-9 was brought on board. The sheriff's office currently has three K-9's. A department spokesperson said they obtained Max for $7,000.

In a comment to the News & Observer, the Durham County Sheriff's Office spokesperson AnnMarie Bren said the safety measure "didn't activate the way it should."

The safety measures, provided by a third-party company, American Aluminum, are still being used in other Durham County Sheriff vehicles, and there have been no other reported issues.

The equipment was installed in the vehicle, a 2014 Dodge Charger, at the time of the purchase.