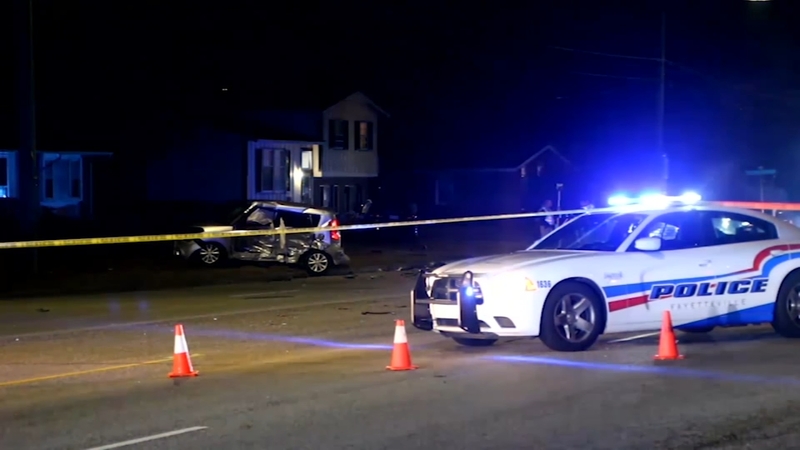 FAYETTEVILLE, N.C. -- Charges are pending after a child died days after a Fayetteville crash that also seriously injured three others Monday night.

Fayetteville police said a 7-year-old has died on Wednesday after a crash that seriously injured three others Monday night.

Cell phone video shows the chaotic moment: neighbors rushing over to help two young boys out of a crushed car.

That devotion turned to desperation once Leggett came outside to find a broken fence and a mangled Kia Soul.

"The car started smoking so we didn't want anyone to burn up in the car. But the guy was in bad condition, bad shape," said Leggett.

Leggett says he grabbed towels and supplies as he called 911. Soon after, he started calling on God.

"We started praying there on the spot for them, for their families that they would get through this rough time," said Leggett.

Those are prayers the family of the victims involved in the crash will need.

The Kia sedan driver had his two little brothers; ages seven and nine with him when his car collided with a Kia Soul.

After days on life support, the driver's youngest brother died in the hospital.

"My heart goes out to the family. That could be anyone. We're all one car ride away from the same thing happening at any given moment," said Leggett.

Sadly, neighbors on Hope Mills Road say drivers are often subjected to moments like what happened on Monday.

"When school's out and it's rush hour. It's mad time, so a flashing like might do it," said Lavender.

Despite the deadly outcome, the Leggett and the victim's family say prayers are still welcome.

"If it were you, you would want someone to do that for you," said Marlies Leggett.

Fayetteville Police say charges are pending against one of the drivers. The Kia sedan driver and his 9-year-old brother remain in the hospital. The Kia soul driver was also rushed to the hospital with serious injuries.