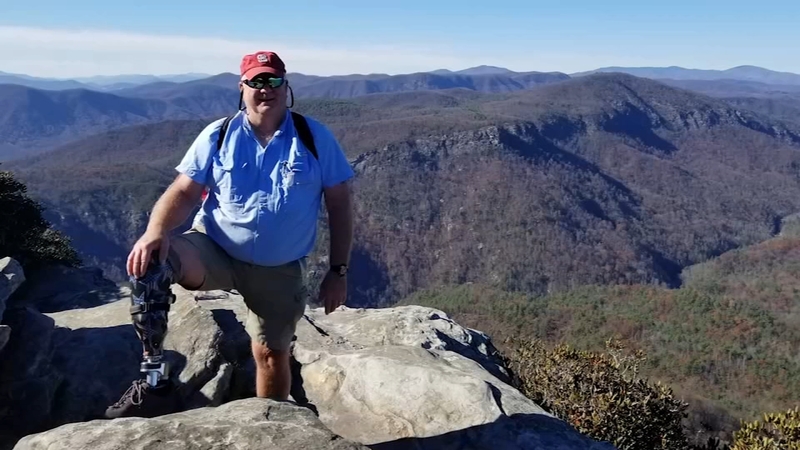 As we celebrate Veterans Day nationwide, one North Carolina hero is sharing his story in hopes of inspiring fellow veterans to regain their lives.

"It's the best thing other than my salvation that ever happened in my life and my wife," said Kevin Beck.

Kevin Beck spent eight years in the US Navy as a jet engine mechanic and suffered a crushing injury to his right leg- but he originally feared losing his leg would lead him to losing the active lifestyle he lived.

"They were going to saw my leg off right then," Beck said. "Hallelujah, I was able to not have that done and I actually served for five more years after that. I lost most of my hearing in my right ear also. I had a lot of surgeries over the years, 14 to be exact, on that foot trying to save it. Finally, on December 19th of 2014 I had it removed and I don't look back. For over 30 years, I suffered with a very painful and as my wife put it, an alien foot. Now I'm able to go out and live my life really well."

Beck said the Durham VA hospital gave him a shoulder to lean on throughout his amputation process and implantation of the Abbott DRG Neurostimulator device. Now he's able to be that shoulder for others like himself through adaptive sports like skiing, scuba diving and hiking.

"Winston Churchill said ,'Never give up, never surrender'," said Beck. "I like to be called Bartholomew from the Bible as the encourager. That's one of the things God has called me to do is encourage others. If you don't try, you can't succeed and if you do try and you fail get up and do it again."

Beck councils young men and women who have recently come back from the world and has a special message today for all veterans: