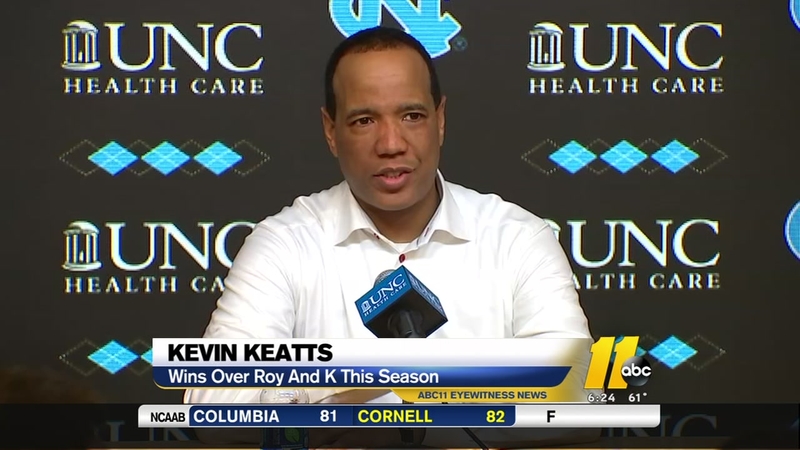 CHAPEL HILL, NC (WTVD) -- NC State has now beaten both Duke and UNC this year. Say that out loud. It's tough to fathom. But here we are. That's reality after another massive effort by Kevin Keatts' Wolfpack on Saturday afternoon.

The game stat that jumps out Saturday is 15-30 from three-point range (including a UNC opponent record 7-7 from three for Al Freeman), but more than anything, this was another case of the Pack's resolve.

There were countless occasions on Saturday afternoon at the Smith Center where NC State could've folded up its tent and left satisfied with making UNC work for a win. Worse, it could've capitulated like last year and suffered another lopsided defeat. This is not that kind of team though. Keatts has made sure of it.

Al Freeman told ABC11 afterward "we only ever think of winning." Sure, this is a different NC State team than last year, personnel-wise, but more importantly, they have vastly improved between the ears.

We talk about his rigorous conditioning demands, but it's that mental rehab that Kevin Keatts deserves the most credit for.

As Markell Johnson said following the win "he believes in all of us." That belief has manifested itself in three colossal wins for their tournament resume. Sure, there have been hiccups along the way and there will be more, but this is one heck of a first-year foundation that Keatts is building.

That 51-point humiliation at the hands of the Heels felt like just yesterday when I entered the Smith Center on Saturday. Now it seems like eons ago. The Wolfpack having a 5-4 record in the ACC so far is far beyond expectations for State. Their schedule is manageable going forward.

The NCAA tournament is now a realistic goal. Things are getting fun in Raleigh, and I suspect this is just the beginning.