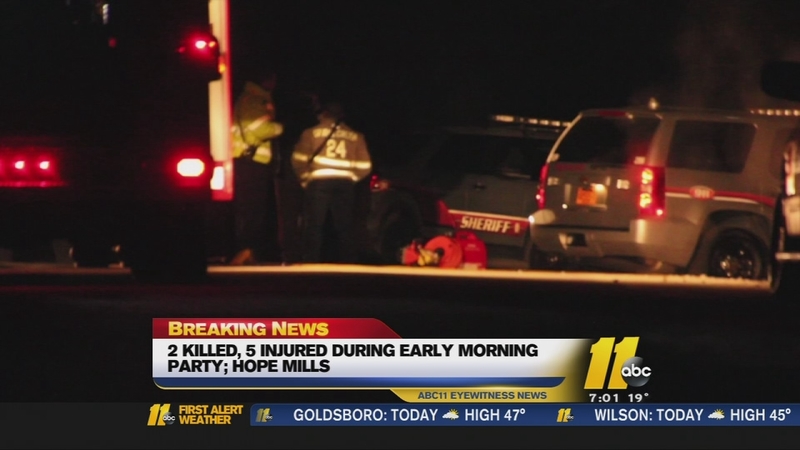 HOPE MILLS, N.C. (WTVD) -- Two people were killed at a house party in Hope Mills Sunday that was supposed to have been a celebration of a woman's birthday.

The violence erupted early Sunday morning at a secluded home off Gumberry Drive.

Neighbor Nikita McCray was awake around that time.

"I get up about 2:00 or 3:00 to check doors again, to check the kids, check the house," said McCray. "I did hear shooting, but I just thought they were out there shooting like they usually do."

McCray said parties are constantly held at the house, but she was shocked to learn that two people were killed.

"On the weekends, there are two houses over here that are partying houses, shooting every now and then, but nothing ever very serious going on," said McCray. "It could have been during the day, kids could have been out playing or anything. So I really hope they get it together back there."

The man who owns the home spoke with ABC11 off-camera. He said everyone was at his house celebrating Graham's birthday. The homeowner wouldn't say what led up to the shooting. He only commented that he felt bad this happened to his friend.

There have been no arrests or charged files in the double-fatal shooting. The Cumberland County Sheriff's Office said the investigation is ongoing.

Five other people were hit by bullets during the shooting. The conditions of the five people who were injured are unknown

Anyone with information is asked to call the Cumberland County Sheriff's Office at (910) 323-1500 or dial 911 for immediate assistance.