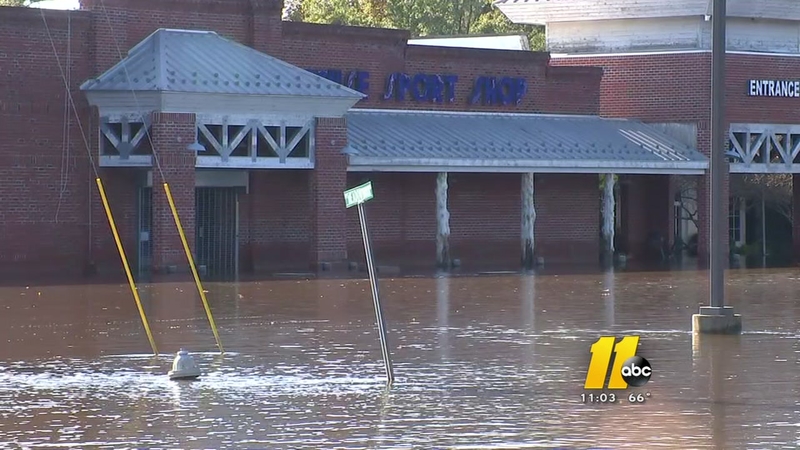 Residents wait to be able to return home in Kinston.

KINSTON, N.C. (WTVD) -- In many parts of Eastern North Carolina, water has receded and life has begun to somewhat return to normal after the flooding from Hurricane Matthew.

But in Kinston, that process may be days away.

Officials estimate the Neuse River in Kinston may not return to normal levels until at least Wednesday.

As many as 1,000 structures may be affected by the flooding in Kinston.

And even then, it might take some residents several days to a week to be allowed back to their homes.

"It got probably seven feet of water behind my house," described Fleming.

He's still without power but is thankful he's not dealing with flood damage. He said much of that water flowed around his home and into his neighbors' homes. Fleming said many of his neighbors are staying with relatives so Shine Street is a little quieter these days.

He also lives across the street from an assisted living home, that he says took on at least 2 feet of water.

One of the shelters is Kinston High School on Queen Street. That location is fairly easy to get to by car, but the second shelter at Lenoir Community College is only accessible through military escort, according to a member of the National Guard standing watch over a nearby road closure.

In a tour by the National Guard, floodwaters are still covering U.S. 70 and surrounding businesses. There is even a military vehicle sitting in the floodwater.

The National Guard is still out blocking roads and directing traffic.

FEMA is on the ground working to fulfill needs at area shelters, where 200 people are staying at facilities open right now.

Some people stopped by homes Monday to check on the damage.

Marion Jones, 86, went by to assess the damage on his daughter's home.

"She's going to have to make some improvements somewhere and try another place," Jones said. "Because she can't live here. Mom won't allow her to live here no more."

Lenoir County officials are working to find temporary homes for people. Hotel rooms and mobile homes are some of the options.

In a news conference, emergency leaders said they estimate more than 800 homes may be impacted by flooding, along with more than 170 commercial properties. They estimate the dollar amount of damage could total $125 million.

They stress these are only estimates because they have not been able to fully survey the area because of the flooding.