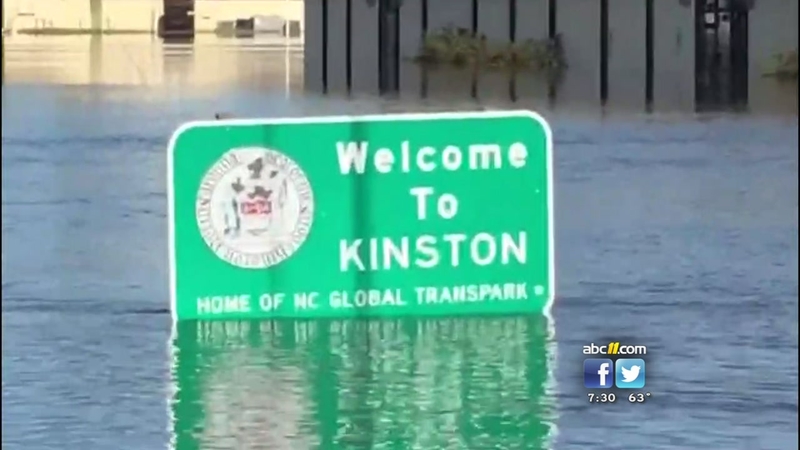 RALEIGH (WTVD) -- When hurricane Matthew severely flooded the Neuse River in Kinston and other towns down east it marked the second time a 100-year flood hit the area in just 17 years.

So after seeing both hurricanes Floyd and Matthew cause catastrophic damage in less than two decades, the mayor of Kinston came to Raleigh and the legislature Wednesday with his city manager and a council member to ask for help.

"All we're asking of our state and federal legislators is let's have some serious discussions on what the options could be whether we like them or not. And then let's put a price tag and let's figure out what's the best route to go," said Mayor BJ Murphy.

But Murphy and the City of Kinston are also making some suggestions.

One is to find an additional drinking water source for the City of Raleigh during big storms.

The idea is to draw down Raleigh's current source Falls Lake before a storm so it can hold back more flood water from the Neuse River.

But the Army Corps of Engineers, which operates the lake, says pre-storm releases can be a guessing game and could cause even more flooding downstream.

Due to the uncertainty of storm forecasts, pre-storm releases from Falls Lake could have the unintended consequences of making downstream flooding worse. Therefore, such pre-storm releases are not allowed under approved flood operations for this project.

The Corps of Engineers is currently conducting a feasibility study for water reallocation at Falls Lake for the City of Raleigh which will not impact flood operations.

And, they add, during Matthew the Corps didn't release water until the river was out of flood stage holding back 34 billions of gallons for weeks.

As for the additional drinking water source for Raleigh, and the other cities and towns it supplies, an NC State environmental engineer says the Capital City has been looking for that for more than a decade.

Another proposal from the folks in Kinston is to build another flood control structure - a dam and a lake - downstream from Raleigh to provide more flood control.

Such a project would be expensive and require federal funding. But Kinston's mayor says it's worth it.

"All we're asking for is, 'Hey, let's look at some very serious, very expensive options.' But none of them outweigh the cost of losing 28 lives," he offered.