KKK recruits in Harnett County ahead of North Carolina rally 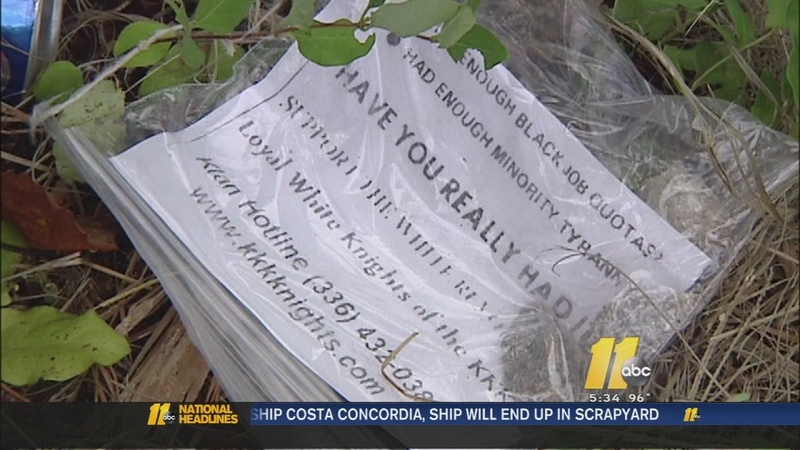 HARNETT COUNTY, N.C. (WTVD) -- Ku Klux Klan recruitment fliers were delivered to some Harnett County residents over the weekend. A Klan leader told ABC11 that the deliveries are ahead of an upcoming North Carolina rally.

The fliers were distributed in the Pineview area sometime late Saturday or early Sunday morning. Pineview is an unincorporated area located between Sanford and Lillington.

Several versions of a recruitment call are wrapped in plastic bags, weighed down with rice or rocks. They read "Save Our Land, Join the Klan." It asks neighbors whether they're tired of black crime, black welfare and race-mixing, and lists a Triad-area Klan hotline for membership.

One Tingen Pointe neighbor named Lila asked that her last name not be used in this story. She says the neighborhood posted the fliers to their Facebook page Sunday, and volunteers gathered them for trash.

She and many other Pineview-area residents were at a loss for words describing their initial reactions.

"It's ridiculous that this is still going on... how somebody or a group of somebodies could have that much hate in their heart to recruit individuals," said Lila. "That trash isn't welcome here."

"You know they were talking about it in Sunday school," said another resident, Janet Holder. "And they were just... just really amazed that somebody would throw anything out like that now."

"That's hate mail," added Harold Ray. "I don't think much of it. It's unnecessary. It's uncalled for."

Chris Barker, the Imperial Wizard of the North Carolina-based Loyal White Knights of the Ku Klux Klan said by phone Monday that the chapters' weekend distributions took place nationwide from California to Louisiana and Georgia.

"It ain't against the law to distribute fliers. So if they don't like it, they can pick it up and throw it away. Point blank," Barker said. "It ain't no different than the pizza guy who comes to my door."

Barker said the distribution comes ahead of an Aug. 9 rally set to take place outside of High Point. He expects thousands. Despite the fliers' concentrated messages towards blacks, Barker said the KKK has a new mission.

"If they (blacks) would actually listen to what we're talking about, it ain't about them anymore with the Klan. It's usually about the immigrants who are flooding (the United States)."

Some recipients of the flier called Harnett County deputies to the neighborhood, but the distribution is not illegal. It's solicitation with contact information, including a website and a Pelham, N.C. post office address for the Loyal White Knights.

Barker said following the August rally, the group plans to rally against immigration in Texas.