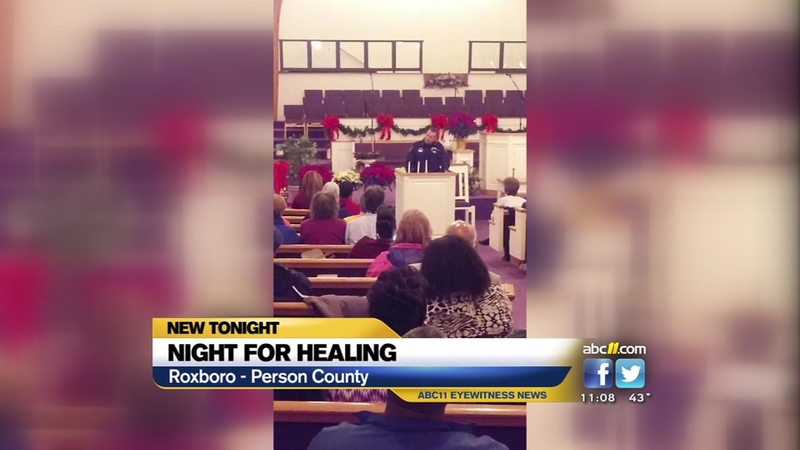 Night for healing in Roxboro

ROXBORO, North Carolina (WTVD) -- Members of the community held a prayer vigil Monday evening in Roxboro after members of the KKK drove through the city during the weekend.

The vigil, which is being called a way for the community to heal, began at 7 p.m. at New Mount Zion Baptist Church.

Dr. David Chambers, a pastor, said the vigil is for everyone, including the KKK, and is a chance to come together.

"I think that this is an opportunity for Person County to show who we really are. This is a tight knit family," Chambers told ABC11. "We don't care about the color of someone's skin. We care about the content of their character."

A prayer vigil was planned in Roxboro as a counter to a recent KKK appearance.

Residents said they were hurt and disgusted by what happened.

"I think it was just unacceptable. I was perplexed because I got a phone call from my niece and she is 21 years old and upset," resident Tara Gaddy said. "She's never really experienced racism and I didn't quite know how to tell her how to handle it -- because I hadn't experienced it in the way that she had experienced it on Saturday."

Some residents are also upset that police shut down several intersections and lead the group through the city.

He said the intersections were closed to get the KKK out of Roxboro as quickly as possible. They ended up only being in the city for about 5 minutes.

Hess condemned the group's actions but noted that they could not legally prevent them. He said they had less than an hour's notice for the event and that it was safer for everyone to have a police escort.

Hess is one of the organizers for the vigil.

Neighbors said they understand that the KKK has freedom of speech, but it doesn't change their concern and disappointment.

"I think they need to stop what they are doing because this is not 1940 and 1920. People will not take it like they used to take it," said Gaddy. "I don't want to see a lot of rioting and fighting. I want to live in peace. I don't want to fear going to Walmart, the grocery store, to work because people are fighting for different reasons."

Hess is asking for anyone with evidence or video of the KKK using racial slurs to contact police.