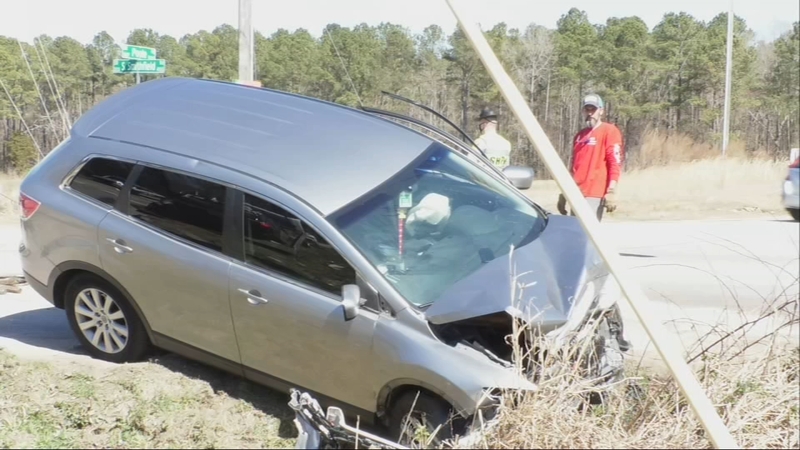 KNIGHTDALE, N.C. (WTVD) -- A woman is in critical condition after a Nash County high-speed chase ended in a Knightdale crash.

Spring Hope Police Department said the SUV appeared to slow down when a trooper flashed lights and sounded sirens, but the driver of the SUV, later identified as Terry Lamar Harris, 28, then did a U-turn through a parking lot and sped off out of town.

Harris took off down US 64 into Wake County, eventually reaching speeds around 120 miles per hour. Harris even drove his SUV onto the shoulder of the road, to zoom past slower vehicles in his way.

Harris eventually exited onto Smithfield Road. Police said he ran through the stop light at Poole Road at around 55 miles per hour and slammed into the side of a black 2013 Lexus.

Harris was not injured in the collision, but the Lexus driver, a 68-year-old female of Wendell, was rushed to the hospital in critical condition with life-threatening injuries. Her name has not been released.

Investigators took Harris into custody after the crash. They also found 164 grams of marijuana in Harris' SUV.

Harris now faces multiple felony charges. He was booked into the Nash County Jail under a $50,000 secured bond, with a first court appearance scheduled for Tuesday, Mar. 9 in Nash County District Court.