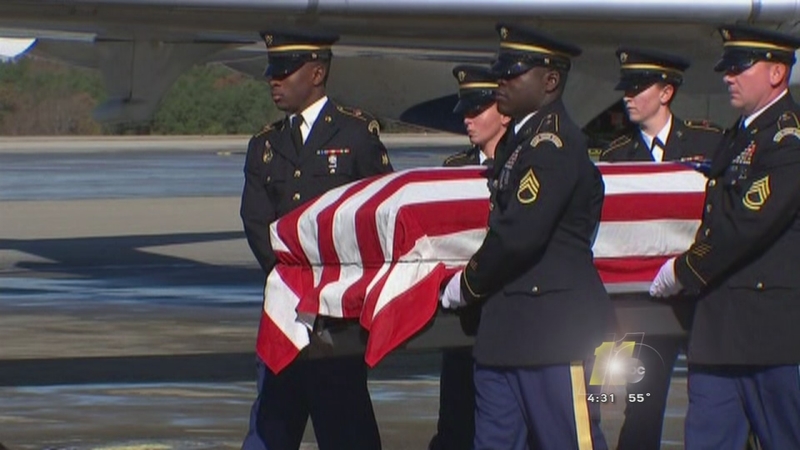 RALEIGH (WTVD) -- Harold Ivey never got to meet his big brother, Cpl. Charles Ivey, but on the Tuesday before Thanksgiving, the 65-year-old from Henderson shared a moment with him on the tarmac at Raleigh-Durham International Airport.

He placed a hand on his brother's casket as it was rolled out of a commercial airliner, draped in an American flag.

For the first time,Harold Ivey shares a moment with his brother, killed in Korean War before he was born @ABC11_WTVD pic.twitter.com/eCNEbu6X0S

"I'm real proud for him to come back," said Harold. "You know, being lost all this time."

It was 65 years ago when Cpl. Ivey was killed, serving his country in the Korean War.

He was reported missing in action. Three years later, his fellow soldiers who had been held as prisoners of war reported he was shot and killed during the battle.

His remains wouldn't be identified until August 2015.

In the 1990s, North Korea returned boxes of human remains to the U.S. The Department of Defense. The POW/MIA Accounting Agency said the boxes contained remains of at least 600 U.S. servicemen who fought during the Korean War.

Harold said two of his sisters, who have since passed, gave blood in 2005 to help with the identification process. Ten years later, the military informed his family that along with a dental comparison, the DNA matched; Charlie, as Harold calls him, had been found.

"It's something I know my mother and father would be proud of," Harold said of his brother's long-awaited homecoming.

During an emotional ceremony on the tarmac, an Honor Guard saluted Cpl. Ivey's flag-draped casket as it was carried off a commercial Delta flight.

Onlookers from RDU's Terminal 2 and passengers on board the plane sat quietly as Harold, his only living sibling, and the rest of his family took a few minutes to welcome him home.

"It's the last thing I can possibly do for him is for him to be honored in this way," said Harold. "Even though I've never met him, I'm still proud of him for what he did."

From RDU, the Patriot Guard along with local law enforcement escorted Cpl. Ivey's casket to his hometown of Henderson. He will be buried there with full military honors Sunday Nov. 29, the anniversary of his death.