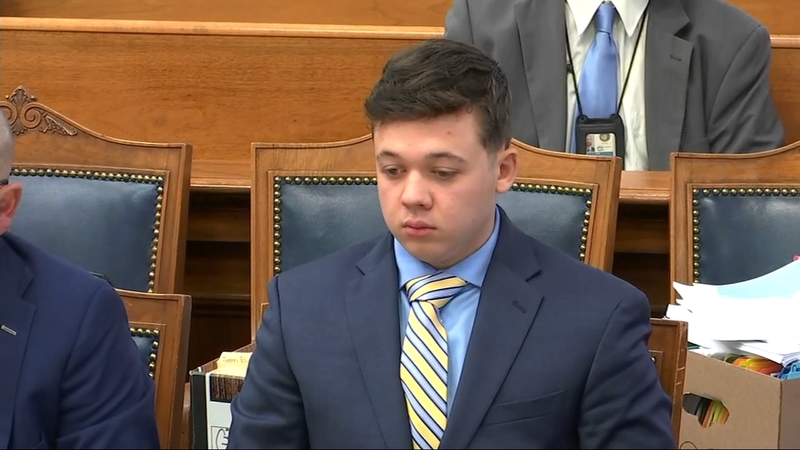 KENOSHA, Wis. -- Prosecutors at Kyle Rittenhouse's murder trial Wednesday played video for the jury that captured scenes of protesters and the sound of gunfire in the street as they began detailing the night Rittenhouse shot three people, two fatally, during a tumultuous demonstration against police brutality.

In one of the bystander videos livestreamed that night by Koerri Washington, a social media influencer from Kenosha, Rittenhouse can be seen running through the frame, carrying a fire extinguisher.

Washington said he followed Rittenhouse because he saw him earlier that evening and thought he seemed like an "interesting figure."

"He just looked young to me," Washington said. "It wasn't anything malicious. Young person, in a situation. And he had his gloves on, and he was smoking cigarettes and stuff."

Shortly afterward, the video captures the sounds of gunshots, including those of Rittenhouse shooting Joseph Rosenbaum, the first man killed that night. Washington, who was on a skateboard, said when he heard the shots, he "skated away to safety."

Prosecutors begin making their case against Kyle Rittenhouse as they make their opening statements.

Rittenhouse, now 18, is charged with killing two men and wounding a third during the summer of 2020 in a politically polarizing case that has stirred furious debate over self-defense, vigilantism, the Second Amendment right to bear arms, and the racial unrest around the U.S. in the wake of the killing of George Floyd in Minneapolis.

Rittenhouse, a one-time police youth cadet, could get life in prison if convicted.

The teenager traveled to Kenosha from his home in Illinois after protests broke out over the shooting of a Black man, Jacob Blake, by a white Kenosha police officer. Rittenhouse said he went there to protect property after two nights in which rioters set fires and ransacked businesses.

During opening statements Tuesday, prosecutors portrayed him as the instigator who set in the motion the night of bloodshed, while his lawyer argued that he acted in self-defense after Rosenbaum tried to grab his gun and others in the crowd kicked him and hit him in the head with a skateboard.

On Tuesday, a friend testified that Rittenhouse was pale, "freaking out" and "really scared" moments after shooting the three men and said he had to do it because "people were trying to hurt him."

Dominick Black, who faces his own trial for buying the 17-year-old Rittenhouse an AR-15-style rifle he wasn't old enough to legally possess, said he was stunned when Rittenhouse called him seconds after the first shooting.

"I didn't believe the gunshots were actually his until I got a phone call, and I answered it, and he just said, 'I shot somebody, I shot somebody,'" Black recounted.

Black, who was dating Rittenhouse's sister at the time, testified that he and Rittenhouse had gone to downtown Kenosha to help protect a car dealership after vehicles were burned the night before. Black said he thought nobody would start trouble if they saw him with his assault-style rifle. He also said Rittenhouse helped give medical aid and put out fires.

Black said he was on the roof as protesters hurled gasoline bombs and rocks at the business.

Moments after shooting the 36-year-old Rosenbaum, Rittenhouse shot and killed Anthony Huber, 26, a protester from Silver Lake, Wisconsin, who was seen on bystander video hitting Rittenhouse with a skateboard.

Defense attorney Mark Richards portrayed Rittenhouse as the victim, saying Huber was "trying to separate the head from the body" with the skateboard.

Rittenhouse then wounded Gaige Grosskreutz, 27, a protester from West Allis, Wisconsin, who had a gun in his hand as he stepped toward Rittenhouse.