John Black took the stand on Day 8 as defense attorneys want to show Rittenhouse had reason to fear for his life.
AP
By Michael Tarm, Scott Bauer and Kathleen Foody, Associated Press 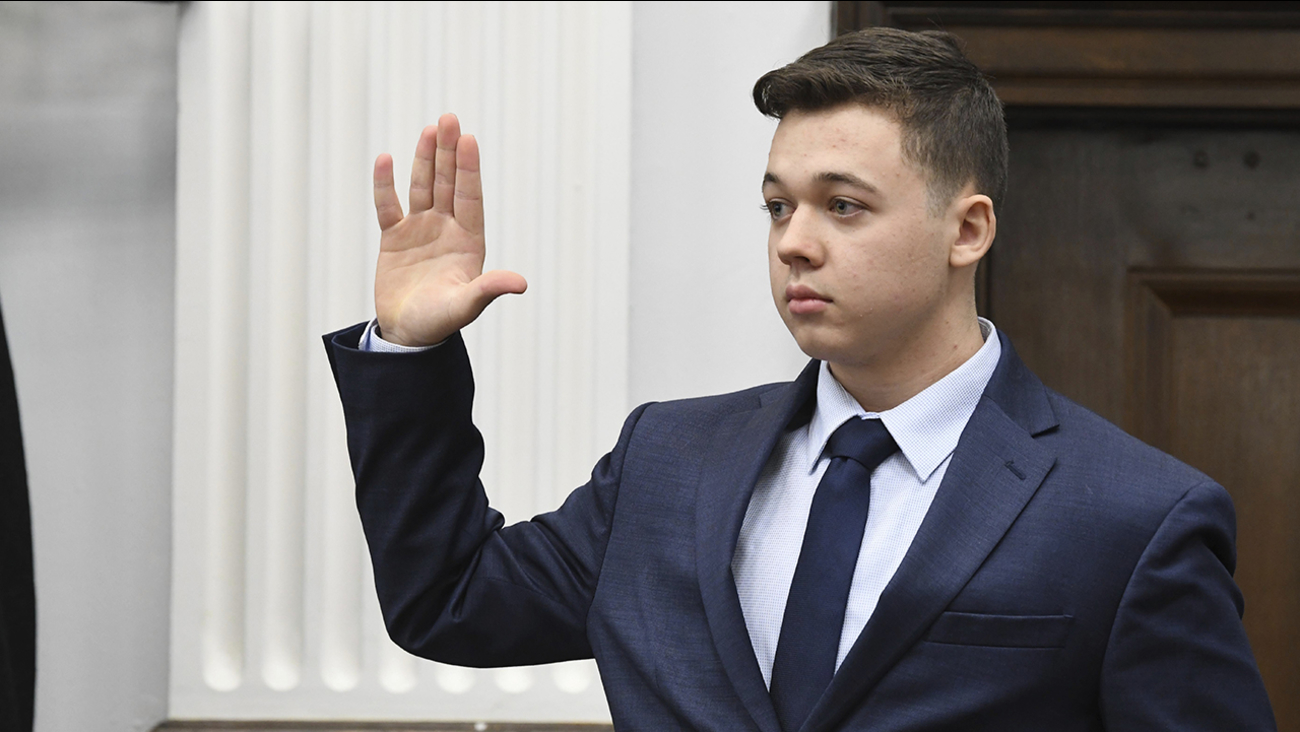 Kyle Rittenhouse is sworn in before he testifies at his trial at the Kenosha County Courthouse in Kenosha, Wis., on Wednesday, Nov. 10, 2021. (Mark Hertzberg/Pool Photo via AP)

KENOSHA, Wis. -- Less than three seconds elapsed between the time a protester in the streets fired a shot in the air and Kyle Rittenhouse opened fire with his rifle, a use-of-force expert testified for the defense Thursday at Rittenhouse's murder trial.

John Black took the stand as part of an effort by Rittenhouse's lawyers to show that the then-17-year-old had reason to fear for his life and acted in self-defense when he shot three men, killing two, during a turbulent night of protests against racial injustice in Kenosha last year.

The defense has suggested to the jury that the relevant timeframe for determining whether Rittenhouse's use of force was reasonable consists of just a few minutes around the shootings.

Black said it took 2 minutes, 55 seconds, from the time the first man who was shot that night, Joseph Rosenbaum, chased Rittenhouse across a car lot to the time Rittenhouse approached police, after the shootings.

Prosecutors, for their part, have stressed a much longer window, saying the tragic chain of events occurred over hours, starting with Rittenhouse's fateful decision to go to a volatile protest with a rifle.

Rittenhouse, now 18, committed the shootings during unrest that erupted in Kenosha in the summer of 2020 over the wounding of Jacob Blake, a Black man, by a white Kenosha police officer. He could get life in prison if convicted. Rittenhouse is white, as were those he shot.

Rittenhouse had gone to Kenosha with an AR-style semi-automatic weapon and a medic bag in what the former police and fire youth cadet said was an effort to protect property after rioters had set fires and ransacked businesses on previous nights.

The case has divided Americans over whether Rittenhouse was a patriot taking a stand against lawlessness or a vigilante.

Gaige Grosskreutz, the sole survivor shot by Kyle Rittenhouse in Kenosha, and his attorney discuss their reaction to Rittenhouse's testimony and his own experience on the stand.

On Wednesday, Rittenhouse spent most of the day on the stand giving his account of what happened in those frenzied minutes on Aug. 25, 2020, sobbing so hard at one point that the judge called a recess.

"I didn't do anything wrong. I defended myself," he said.

Rittenhouse testified that he heard a gunshot directly behind him as he was being chased by Rosenbaum, but also that he never saw Rosenbaum with a gun. Authorities said the shot was a bullet fired into the air by someone else in the crowd.

On Thursday Black testified that about 2 3/4 seconds elapsed between that shot and the first one fired by Rittenhouse.

MORE: How did Kyle Rittenhouse do on stand in murder trial? He held his own, experts say
EMBED More News Videos

Kyle Rittenhouse becomes emotional while on the stand for charges that he killed two men and injured another.

In an account largely corroborated by video and the prosecution's own witnesses, Rittenhouse said that Rosenbaum cornered him and put his hand on the barrel of his rifle, the second man hit him with a skateboard, and the third man came at him with a gun of his own.

His testimony was interrupted by an angry exchange in which his lawyers demanded a mistrial with no right to a retrial, accusing the chief prosecutor of asking Rittenhouse out-of-bounds questions.

Circuit Judge Bruce Schroeder, though plainly mad at the prosecutor, did not immediately rule on the request. On Thursday, he pressed ahead with the case and said it would be ideal if the trial were to conclude on Friday.

Much of the testimony has centered on Rosenbaum's killing, since that set in motion the bloodshed that followed.

Kyle Rittenhouse testified that a man that he shot in Kenosha, Wisconsin had threatened to kill him. Warning, video contains graphic language.

Rittenhouse said Rosenbaum was carrying a chain earlier that night and had twice threatened to kill him.

"If I would have let Mr. Rosenbaum take my firearm from me, he would have used it and killed me with it," he said, "and probably killed more people."

During cross-examination Wednesday, prosecutor Thomas Binger sought to drive home the state's contention that Rittenhouse created the dangerous situation in the first place.

"You understand that when you point your AR-15 at someone, it may make them feel like you're going to kill them, correct?" Binger asked.