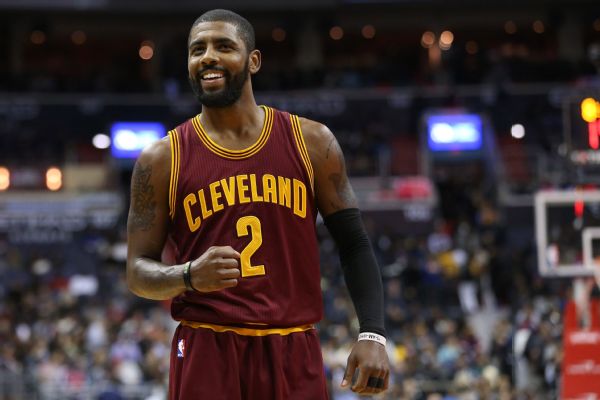 Some people just have different views of the world. Count Cleveland Cavaliers All-Star guard and former Duke player Kyrie Irving among those who do.

Irving believes the Earth is flat. As in, there's no curvature of the planet. Flat. Like an actual map.

"This is not even a conspiracy theory," Irving said during a "Road Trippin' with RJ & Channing" podcast with teammates Richard Jefferson and Channing Frye. "The Earth is flat. The Earth is flat.

The three were discussing conspiracy theories -- on an airplane -- when Irving brought up the subject to Jefferson and Frye.

Irving told ESPN's Arash Markazi on Friday that he holds true to his belief.

Among Irving's other conspiracy theories, he says the lunar landing was fake and that there possibly has been contact with alien life forms.

"The fact that they can make all these movies with alien descriptions, they're not just going on strictly brainpower and this is just creative things that we're going to put out to everybody," he told Jefferson and Frye. "For what? All to put an alien movie out, for what?"
Related topics:
sportsduke blue devilscleveland cavaliers
Copyright © 2022 ESPN Internet Ventures. All rights reserved.
TOP STORIES
Winter storm moves out, refreeze possible overnight
NCSHP reports 200 crashes statewide, urges drivers to stay home
Dozens of RDU flights canceled through Monday evening
Monday events canceled, postponed due to winter weather
Why do we get freezing rain instead of snow or sleet?
FBI identifies hostage-taker at Texas synagogue
How to drive on snow, ice and get out of a skid
Show More
Expect more worrisome COVID variants after omicron, scientists say
After Biden's first year, the virus and disunity rage on
Novak Djokovic leaves Australia after court rejects visa challenge
Ukraine claims Russia behind cyberattack in 'hybrid war'
Hostages in N. Texas synagogue 'out alive and safe,' Gov. Abbott says
More TOP STORIES News