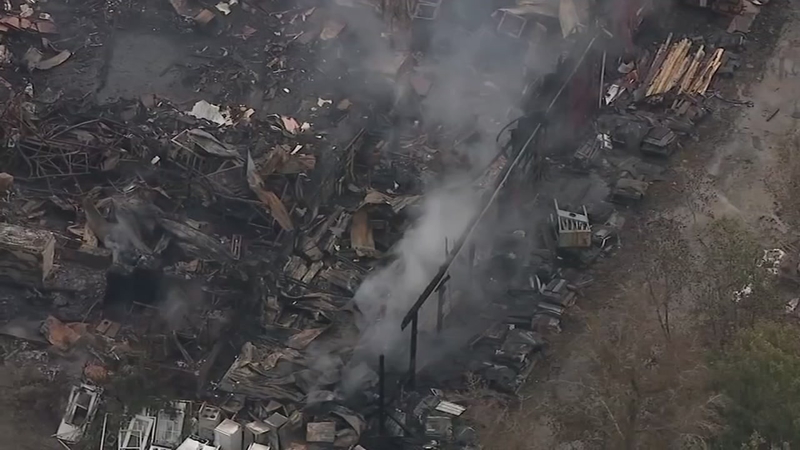 JOHNSTON COUNTY, N.C. (WTVD) -- A large fire at a Johnston County business was caused by a cigarette, the owner told ABC11 on Friday.

Winpy Byrd, how owns Byrd's Wholesale, Inc., said it was actually his cigarette that caused it.

"I dropped it and the wind picked it up and nobody could see it. We've got pictures where it smothered out and then flames," he said.

Wimpy Byrd, the owner, told me it was his cigarette that started the fire. “I dropped it and the wind picked it up and nobody could see it. We’ve got pictures where it smothered out and then flames.” #ABC11 pic.twitter.com/d7C9oSkGWg

The fire broke out Thursday around 7:30 p.m.

Captain Bentley Powell with the Smithfield Fire Department said no one was at the warehouse at the time of the fire.

Johnston County officials are on the scene of a large fire at Byrd's Wholesale, Inc.

He also mentioned the building contained wood products and a mill inside where lumber was sawed.

The owner said he's been at that property since 1969.

Crews were on scene throughout the night to monitor hotspots.

Firefighters said the wind was working against them and reigniting the hotspots.

The Wilsons Mills FD left for a short time to refill on water. One firefighter stayed behind to monitor at least 3 hotspots that continue to cause trouble at Byrd’s Wholesale. The business caught fire last night. An investigation continues this morning @ABC11_WTVD #abc11 pic.twitter.com/3bSWcgwj9T