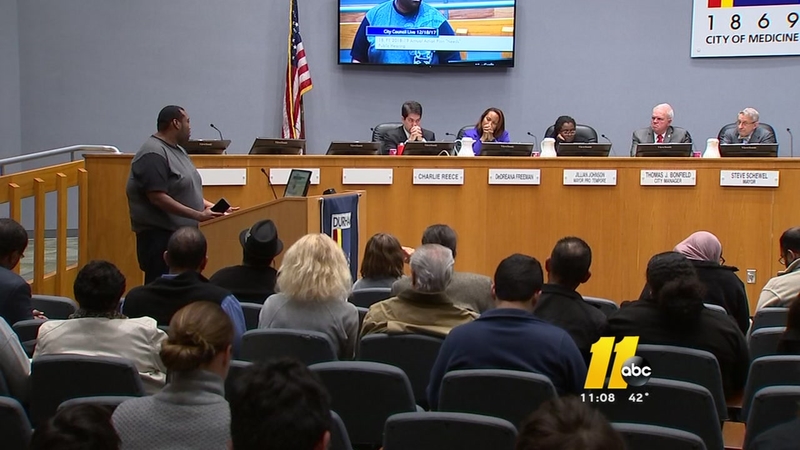 DURHAM (WTVD) -- On Chapel Hill Road in Durham's rapidly-gentrifying Lakewood neighborhood, Ricardo Correa is a church pastor who believes his flock could be better represented at City Hall.

The parishioners at Correa's United Nations Worship Center are mostly working-class Latino immigrants, who could be potentially priced out of this burgeoning neighborhood with its steady stream of new shops, restaurants, and wealthier residents - and the rising home prices that come with it.

"I do want to make sure that the fabric of the community when I came here is still intact, which is the presence of all ethnicities," Correa said.

And so Correa has added his name to the list of applicants to fill Mayor Steve Schewel's now vacant at-large Durham City Council seat.

During the mayoral campaign, Schewel said if won he hoped his vacant seat could be filled with someone from the city's Latino community.

On the eve of the deadline, nine people have applied, four of them Latino; All vying to join a panel where blacks, whites, men, and women have all been elected. But in this city with a Hispanic/Latino population of 13.4 percent, city council has none.

The deadline to apply to fill Durham’s vacant City Council seat is tomorrow. Will the the next city councilor be Latino? At 11, the city residents who say it’s long overdue. pic.twitter.com/NSKXsiNZWR

"I was born in Santiago, Chile," applicant Javiera Caballero told ABC11. "I immigrated to the states when I was 2."

The education consultant and mother of three moved from Chicago to Durham seven years ago.

She now finds herself wanting to play a larger role in a diverse city that she thinks could be better reflected in City Hall.
"I think it's definitely overdue," Caballero said. "When you grow up bi-culturally speaking a different language, you see the world in a different way. It's not the only quality but it's something very much missing and I hope to fulfill that role."

Both Caballero and Correa believe the number of undocumented immigrants in the city, along with newer immigrants unfamiliar with the system of government, have been hurdles for Latinos to reach certain positions of power.

However, Correa points to the high numbers of Durham Latinos serving in the city's health industry and police force.

"We have been catering to the community for so many years," he said. "Now the thought of actually working at a governmental level at city council never crossed our mind. So we're like, there's a possibility."

Applications to fill the vacant city council seat have to be submitted to the City Clerk's office by 5 p.m. on Tuesday.

The City Council will then whittle the list down to three or four finalists and vote for one applicant to fill the final two years of the seat's four-year term.