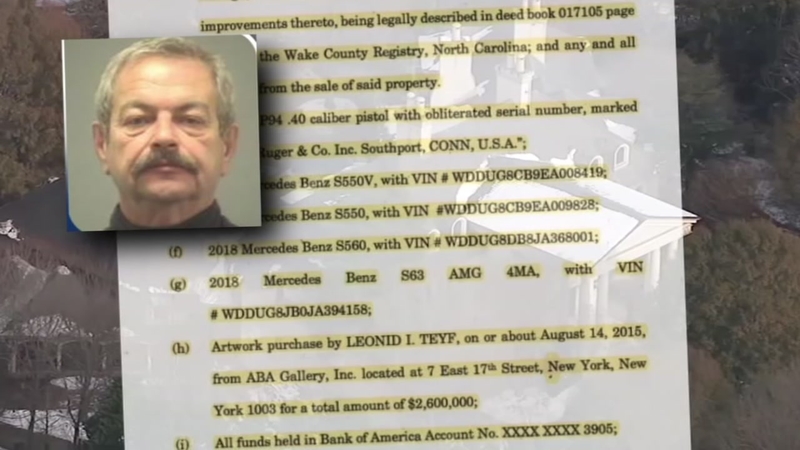 RALEIGH, N.C. (WTVD) -- A central figure in the investigation into Russian meddling in the 2016 U.S. presidential election may possibly have ties to a wealthy Raleigh resident facing numerous federal charges including money laundering and a murder-for-hire plot.

Yevgeny Prigozhin is one of 13 men indicted after Robert Mueller's special counsel investigation.

Prigozhin is a longtime Kremlin ally who has been dubbed "Putin's Chef," and according to a new report from a Moscow-based paper is a close business associate with Leonid Teyf, a Russian national who's been living in the Triangle.

Our newsgathering partners at the News & Observer first reported the connection revealed by the Russian media organization.

Teyf was indicted in November on dozens of federal counts, including a kickback scheme and murder plot.

Authorities said he tried to have a man killed who he suspected of having an affair with his wife, Tatyana. When that plot became unfeasible, Teyf sought to have the man deported, federal agents said.

The 57-year-old Teyf is also accused of laundering $150 million from Russia into the United States.

Novaya Gazeta reported that when Teyf purchased the home in 2012, he was still working for a Moscow-based company and doing business with Prigozhin.

Teyf is not facing any new charges and there's no evidence he played any part in the Russian election meddling.

If convicted on the previous federal counts, Teyf could forfeit his U.S. companies, millions of dollars worth of properties in Raleigh, luxury cars, $2.6 million in artwork, cash in 26 bank accounts, and other personal property including firearms.