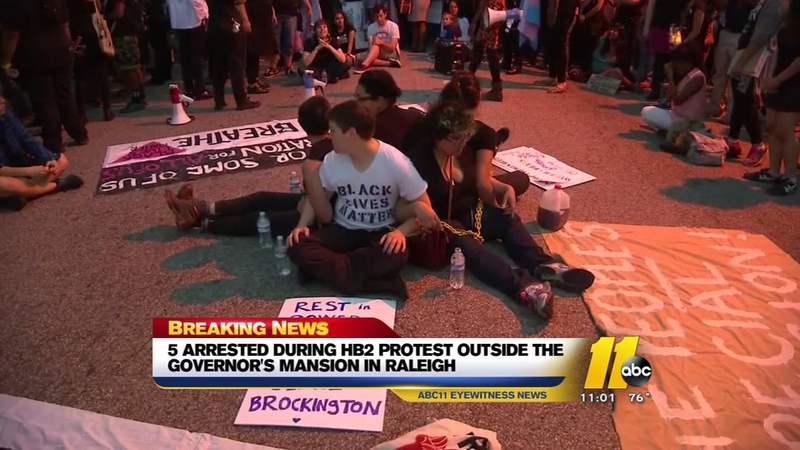 RALEIGH (WTVD) -- Five protesters were arrested Thursday evening after defying police orders to move out of the street.

The group sat with arms linked outside the Governor's Mansion for more than an hour.

All the while, hundreds of others cheered them on.

Angry protesters spilled into the street outside the Governor's Mansion, police patrolling the crowd as people chained themselves together on the pavement.

The crowd grew louder as police started making arrests in the 200 block of North Blount Street. Five protesters were led away with their hands in zip ties.

Police said all were charged with impeding the flow of traffic and with resisting, delaying or obstructing officers.

"All these people are upset," said Micky Bee of the Transgender Law Center at Southerners on New Ground. "They are angry they have been left out of the democratic process. We want in."

Gov. Pat McCrory's campaign released a statement on the demonstrations in Raleigh and similar ones in Charlotte.

5 protestors arrested outside governor's mansion. Others chanting "We love you" #abc11 pic.twitter.com/W1zcaXfcgN

"Standing with North Carolina parents who are worried about the privacy and safety of their children will always be a top priority for the governor, no matter the spin by the media, pundits or politically correct crowd," the statement said.

It's the latest backlash over a new law that restricts cities, towns and counties from passing anti-discrimination rules above state guidelines.

Lawmakers passed the legislation, known as House Bill 2, in just one day of a special session of the general assembly, countering the move of Charlotte city leaders who approved a transgender bathroom ordinance.

Some protestors sitting in the middle of Blount St. with signs #abc11 pic.twitter.com/BTLjmeJ3Ew

"People are outraged at this legislation," Serena Sebring of Southerners on New Ground said. "It is an injustice and an act of violence against our entire community."

McCrory called the Charlotte ordinance "government overreach at its worst."

Police asking protestors to move to the sidewalks #abc11 pic.twitter.com/gIx1nQD3ih

"I think it's my job as governor to make sure that we protect that basic expectation of privacy in a most private moment in each individual's lives," McCrory said. "I can't believe we're even talking about this due to the city of Charlotte government and mayor's overreach, but we can't afford to have that type of government intrusion into our personal lives."

Protestors: "This is not over" pic.twitter.com/rA44godTHv

Bee and other transgender people say the swift passage of HB2 eliminated their communities' freedom of discrimination in North Carolina.

"You can't take into account all of the community input and the unintended consequences in a matter of 10 hours so it's upsetting that democracy was rushed," Bee said.

On social media there was disappointment and backlash.

Actor George Takei tweeting this: "Today, I must sadly join in calls for a boycott of the state."

Raleigh business owner Mikhail Jannik was concerned about the financial impact -- not to his business -- but statewide.

"If people feel like they need to ban North Carolina, I'm a little outraged - not by their outrage - but more outraged that we allowed it to happen," Jannik said.

"This bill is simply about protecting the families and the children of across North Carolina and making sure that they are not put at risk when they go into a public funded or public access restroom," said Dallas Woodhouse of the NC GOP.

Economists say North Carolina has a $20 billion tourism and convention industry at stake.

"I think it's something we worry about when you get an organization like the NFL or the NBA or the NCAA behind it," said Mike Walden, an N.C. State economics professor. "It's much harder to coordinate individual businesses."

Thursday night, the NCAA said: "Our commitment to the fair treatment of all individuals, regardless of sexual orientation or gender identity, has not changed and is at the core of our NCAA values."