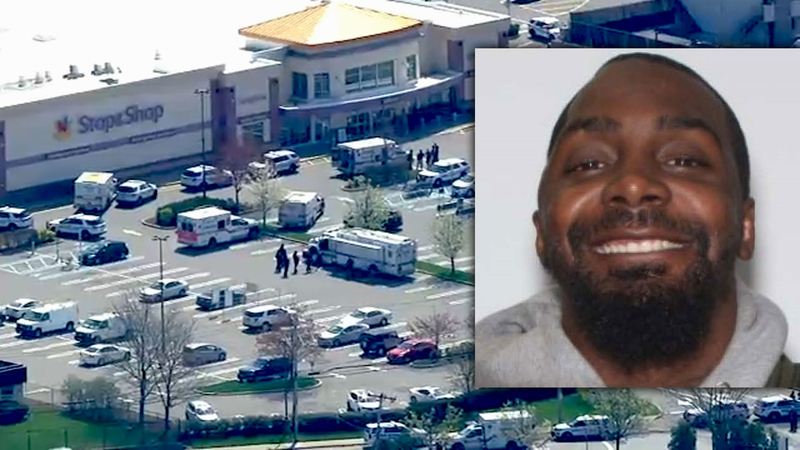 Suspect in custody after deadly supermarket shooting on Long Island

WEST HEMPSTEAD, Long Island -- Police have arrested the suspect accused of going into a Stop & Shop in West Hempstead and opening fire, killing one and wounding two.

UPDATE: Suspect is in custody. https://t.co/v6dSlciwYG

The incident happened at the supermarket on Cherry Valley Road shortly after 11 a.m.

A 49-year-old man was pronounced dead at the scene.

The other two victims were transported to an area hospital where they are recovering.

"I was in the store in the produce department, minding my business, doing my weekly shopping, and I heard what sounded like gun shots, but I never thought that anything like that would happen in the store, so I assumed it was something that just fell over in the service area," one shopper said.
EMBED More News Videos

Stacey Sager has more the reaction following the deadly shooting at a Stop & Shop on Long Island.

Police did evacuate the supermarket.

Nassau County authorities say 31-year-old Gabriel Dewitt Wilson showed up for work Tuesday and went straight to an office on the second floor, shooting a male and a female victim with "a small handgun." He then went to a second office where he shot and killed one of the managers of the building.

"She was hysterical crying. Said there was someone in there shooting," said Thomas Moran, husband of the grocery store manager.

He says his wife was barely spared.

"One of them was right in front of my mom. And if that guy wasn't there, it would've been my mom that got shot," son Joseph Moran said.

Wilson was an employee at the Stop & Shop as a cart collector in the parking lot.

After the shooting, he fled the scene.

Police say calls led them to 100 Terrace Avenue in Hempstead as a SWAT unit surrounded the building.

"The suspect tried to flee down the first floor and was apprehended by Hempstead and Bureau of Special Operations in the police department," Nassau Police commissioner Patrick Ryder said.

Wilson has a prior mental aided case with Nassau County police. In 2006, he was arrested for assault in Baltimore County.

"We don't know the reason for the shooting," Ryder said.

Ryder added there were a couple hundred shoppers in the store at the time.
EMBED More News Videos

The shooting happened at the Stop & Shop in West Hempstead, Long Island.

The West Hempstead School District locked out schools in the area as police searched for the suspect.

Governor Andrew Cuomo released a statement on the shooting.

"We are closely monitoring the ongoing situation in West Hempstead, where multiple people have been shot, and at least one person has been killed, at a grocery store," Cuomo said. "The New York State Police has been directed to assist local authorities in their search for the perpetrator, and my team and I are in constant contact with first responders on the ground. I'm praying for the victims, and my heart breaks for their families and loved ones."

Union President John Durso, of the Local 338 RWDSU/UFCW, also commented on the incident.

"We are devastated by the tragic shooting at the Stop & Shop in West Hempstead," Durso said. "Our thoughts are with the victims, their loved ones, and all those, including workers and customers, who witnessed today's horrifying events. Our priority is and always will be the physical and mental well-being of our members. Representatives of our union are on site at Stop & Shop and will be ensuring that our members have all of the support they need, including access to counseling. We encourage our members to reach out to us for anything they may need during this difficult time. The working people at Stop & Shop are essential workers and ensured that all of our communities, including West Hempstead, had what they needed to navigate the pandemic. The last year has been one full of resiliency, but also one of great worry. These workers have been through a tremendous amount and should never have to fear for their safety. We as a society must recognize that gun violence is a workplace safety issue and that as part of this healing, we must make changes to ensure that this doesn't happen again. We owe it to our essential workers."

The man was struck at Central Park West and West 65th Street.