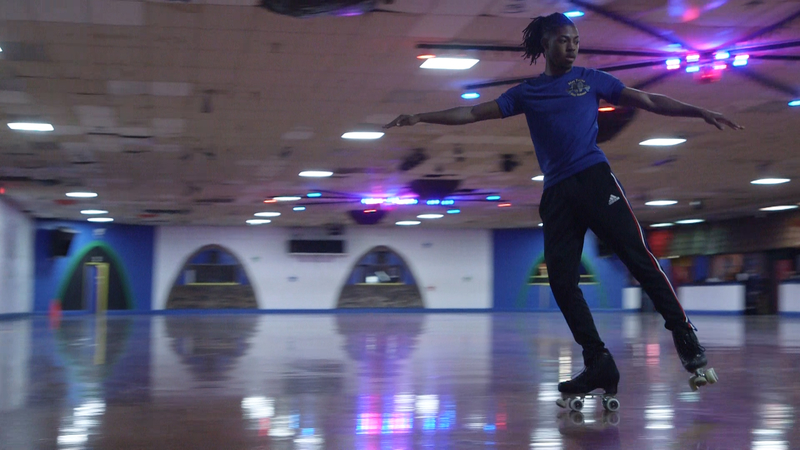 GLENWOOD, Ill. -- "I've been skating since I was six years old. My mom used to come during practice and let me come with her [and] I would see other skaters practicing as well. So one day my mom put me on skates and ever since then I've been skating," Darius Sanders said.

The 18-year-old Glenwood native practices his skating skills most days after he's done with his freshman classes at Moraine Valley College.

"What I really like about skating is the performance and the music. While you're skating, you have this feeling of being free out there, so it's like it's like kind of a therapy," he said.

What started out as a hobby quickly turned into a serious passion. Now Darius is ranked as one of the top artistic roller skaters in the world.

"Artistic style is more as like ice skating. You do more jumps and different spins. But the JB style is just more of like a fun thing," Darius explained. "It's not really serious, it's just going out there and just skating with your friends."

The JB skating style stands for "James Brown," which originated in the Midwest, predominantly in Chicago and northwest Indiana. Brown's music sets the stage for the style, along with other R&B music, but it's "that beat" which skaters work out their routines to.

Darius said he's often inspired by things he sees in JB style and tries to incorporate those into his artistic routines.

"I'm trying to learn and mastered the triple jumps as we jump in the air you spend three times around," he said.

Darius has won more than 100 medals since he started skating, but said his biggest moment so far was when he and his skating partner, Samantha, made it all the way to the 2018 Artistic Skating World Championships.

"It was a really hard competition. I always thought it was competition here but not around the world, so it was really nice seeing them and be able to talk to them as well," Darius said.

"I am very proud of Darius. He works very hard and never complains. This like many sports takes hard work and determination. It's rare to have a young African American young man from the South Side of Chicago to be in this sport and go this far," said Sandi Sanders, Darius' mother. "I would like to acknowledge Julie Jessup from The Lynwood Skate Club for the phenomenal job she has done with Samantha and Darius as their Pairs Coach. Julie and the club owner John Peck, as well as the rest of the club, have always treated us like family."

Darius said he hopes he and Samantha will return to the World Championships soon and take home first place. He says another goal is to also inspire more Chicago youth to get back into skating.

"Hopefully, [we] can go back to Worlds and be number one. And I would like to come back and give back to the community because a lot of stuff going on in Chicago," he said.

The teen said his ultimate goal is to help inspire other Chicago youth to try different sports and hobbies to help keep them off the streets and to encourage more Black kids to get into the sport of artistic skating.

"If you really want to be the best you got to put a lot of effort," Darius said. "You have to get the jumps and tricks down in order for you to make it to the next level and hopefully one day be better than me."
Report a correction or typo
Related topics:
chicagoglenwoodteensportslocalishwls
LOCALISH
Brrr! Frigid dip in the Atlantic inspires cold-plunge wellness spa
Woodworker creates pieces from trees devastated by drought
Teen honored by ESPN for helping kids in Watts
Sip into these Instagram-worthy cocktails at NJ restaurant
TOP STORIES
Wake school board votes to mandate masks for upcoming semester
As eviction crisis plays out in Raleigh, CDC issues new moratorium
Family says body found in Sampson County belongs to Kiara Wiggins
Unvaccinated young adults ending up in hospital with COVID: UNC doctor
LATEST: Chapel Hill-Carrboro City schools to require masks this year
As COVID metrics worsen, youth vaccinations become focus
Show More
Biotech company Amgen to create 355 jobs in Wake County
Man killed 16-year-old girl, then himself in Wilson home, police say
CDC issues new eviction ban for most of US through Oct. 3
$1.5M Raleigh home goes viral for Star Wars-themed movie theater
Officer dead after burst of violence outside Pentagon
More TOP STORIES News