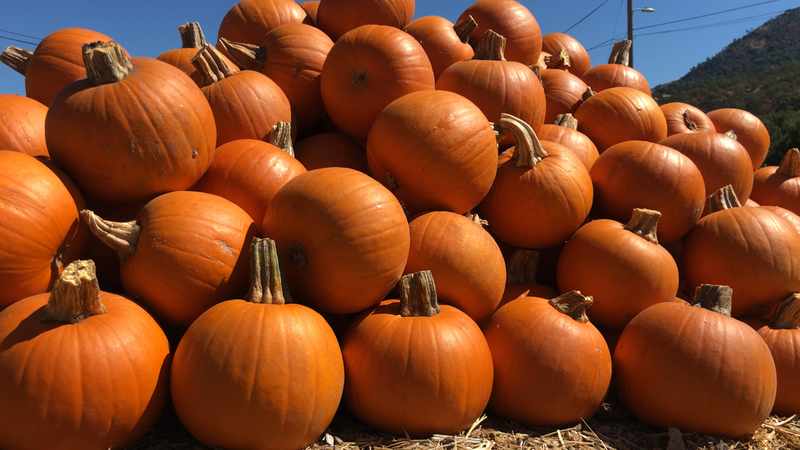 Clayton Valley Pumpkin Farm is the go to spot for pumpkins

The Clayton Valley Pumpkin Farm has been bringing the fall entertainment to local families for decades. This six-acre farm is a pumpkin play land with a trackless train and hay mazes with a large variety of pumpkins.

In 1980 David Osteen and his wife Sharon opened the farm as a U-Pick farm with tomatoes and zucchinis.

"It was in the mid-eighties and we grew some pumpkins seeds," said David, owner of the Clayton Valley Pumpkin Farm and Christmas Trees. "The public has a way of telling you things. The people were just going wild, and very quickly it (pumpkins) became basically our only crop."

Over the years, the farm grew a varietal of pumpkins from blue pumpkins, white pumpkins and many more.

"It was a dream come true growing up on this farm," said daughter Deborah Munch. "My family did start with a few pumpkins on the cement driveway of their house. After a year or two they were selling all of the pumpkins so every year they just started adding more and more pumpkins."

The family was inspired to build attractions around farm from their daughter who was helping her Dad create a small tunnel of straw.

"I remember my little daughter Deborah came up and she looked at the little tunnel of straw," said Osteen. "She looked and said, 'You know, Daddy, if you build this they will come from everywhere.'"

Since that moment the Osteens have built a double play land that includes a hay maze, three giant Lima beans pods, ball launchers, and water duck races. Other attractions include a trackless train for all visitors and on the weekends the farm has a special booths for barbecue, face-painting and kettle corn.

For almost four decades, the Osteen have pride themselves on becoming a fall tradition for many families.

"It is very gratifying," said David. "I remember years ago when the kids were just youngsters and now they have grown up. They are bringing their kids and sometimes we have grand-kids to this farm."

The Osteen family looks forward to the season and welcomes everyone to visit.

"We encourage everyone to come out and just relax and enjoy the atmosphere," says Munch. "Pick out a pumpkin, have some fun with your family and make some lifetime memories."

The farm is typically open for pumpkins during October. It closes for most of November but reopens in December for Christmas trees.