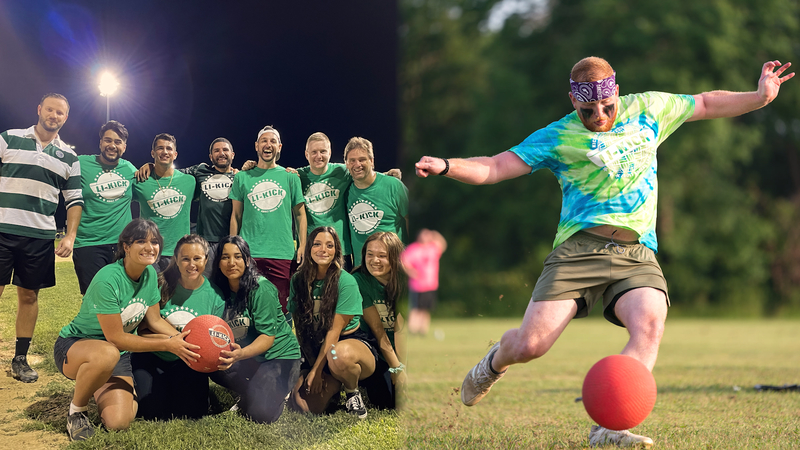 GLEN COVE, New York -- Making new friends as an adult isn't always the easiest, especially if you're living in a new city.

Sal Farruggia encountered this problem after returning to Long Island from college. He wanted more from his life than the daily grind of going to work and returning home again.

So he solved his own problem.

"I was looking for a way to get involved and meet people," Farruggia said. "I couldn't really find anything, so I decided to start a coed kickball league."

Farruggia always loved playing kickball in school, and it's a sport that anyone can play, without even knowing the rules.

He founded LI Kick in 2012 with 126 people, split up among eight teams. But the real magic happened after the game when all the players would get together and hang out.

Soon enough, friendships were blossoming in this adult sports league, and more people wanted to join.

"It grew every year we added more sports, more people, and more locations," said Farruggia. "Now, eight years later, we've had 16,000 people play since that very first day, and it's been the joy of my life."

"If you just came to kickball to kick a ball and go home, and that's it, then you wasted your money," said Miranda Gentile, who plays on Farruggia's team this season.

"If you came here and you're making new friends, and you're having a good time, that is the highlight of the night, and that's why I joined Long Island Kick," Gentile added.

Related: Black People Will Swim breaks stereotypes one pool at a time

Farruggia encourages everyone and anyone to join, regardless of athletic skill.

Athleticism doesn't matter because it's all about having fun and pushing yourself out of your comfort zone to meet people.

"My advice for new people is to just jump right in with both feet, throw caution to the wind," said Farruggia. "Just show up, be prepared to have fun, and the rest of it will take care of itself."