Los Angeles family moves from shed to apartment, thanks to money from 8-year-old son's plant business

He started his business, Aaron's Garden, earlier this year to help his family with finances. Now, he's saved enough to give his family a new home.
WTVD
By Eric Resendiz 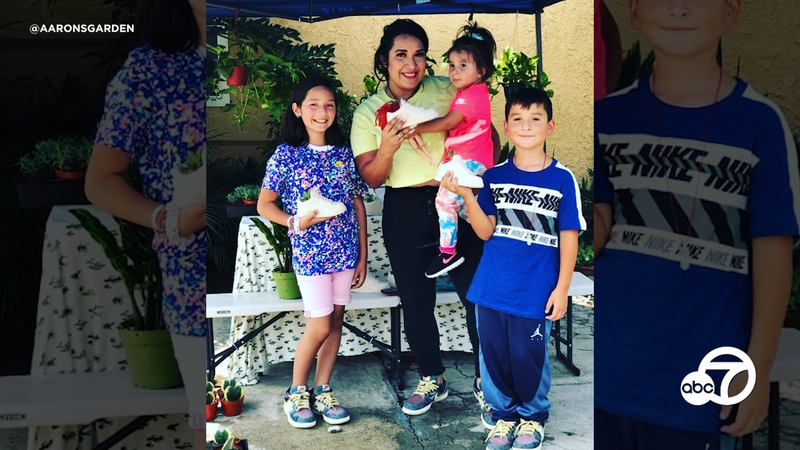 EAST LOS ANGELES, Calif. -- Life is starting to turn around for 8-year-old Aaron Moreno and his family. He started his business, Aaron's Garden, earlier this year to help his family with finances. Now, the family of four has saved enough to move from their shed into an apartment.

"I feel happier because we don't have to struggle as much as before," Moreno said.

Moreno, an East Los Angeles resident, started his business in June to help his single mom, Berenice Pacheco, make ends meet after she lost her job because of the pandemic.

"I never thought we would accomplish and come this far ... we couldn't believe that we got a house," Pacheco said. "I admire him for everything he has been able to do that I haven't as a mom."

Pacheco now has a part-time job and with the funds from that, Aaron's Garden, and a GoFundMe page started by a family friend -- which helped raise thousands of dollars -- the family was also able to buy a car and furniture for their new place.

"I feel happy because now we could go places," Moreno said.

Through all of the financial help the family has received, Pacheco said they were also able to bring back her daughter from Mexico, who was sent to live with her grandparents in 2018 because of financial struggles.

"I'm just so proud of my brother because he was the one who got me back," said Ayleen Pacheco, Moreno's sister.

The family will remodel the garage of their new home to make space for Aaron's Garden.

"I think the best thing for me well, everything has been the best, but it's that Aaron got to reunite us with his older sister with the money he received," Pacheco said. "And he's just been doing everything for us. And he's like the man of the house."
Report a correction or typo
Related topics:
family & parentinglos angelessmall businessgardeningfeel good
Copyright © 2022 WTVD-TV. All Rights Reserved.
TOP STORIES
Trees down, thousands without power after powerful overnight storm
Record-breaking heat today for Triangle
Driver struggles to get permanent tags for truck bought on Vroom
American Airlines flight veers off runway in Charlotte
Officials remain optimistic as tourism in Wake County booms
Violent crime in Durham up 8% during first few months of 2022
Funerals begin for victims of Buffalo supermarket shooting
Show More
Decrease in home sales predicted nationwide but NC housing market hot
NY high court to determine if Bronx Zoo elephant is a person
Juvenile taken into custody in Wake Forest shooting
911 dispatcher who took Buffalo shooting call put on leave
Wake County Sheriff Baker says he'll seek runoff
More TOP STORIES News