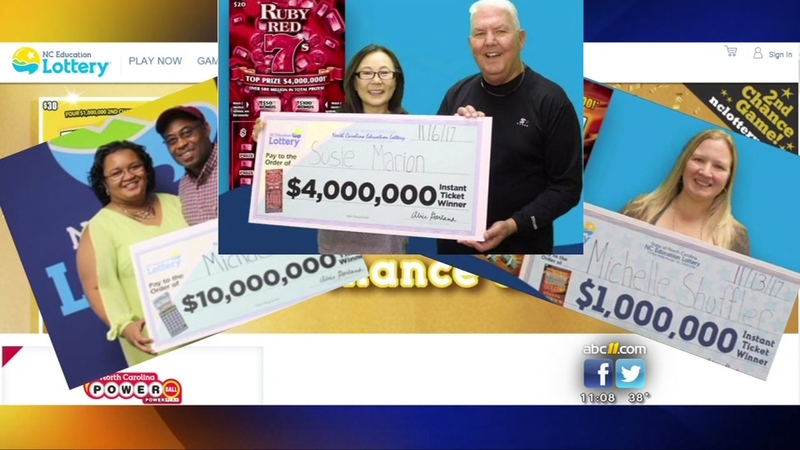 3 big lottery wins in our area! What are your chances of winning?

TRIANGLE-AREA (WTVD) -- Several people have struck it big recently with their lottery wins. But what are your chances of getting so lucky?

"I thought I was going to have a heart attack," said Dennis Morian.

Just last Monday Dennis was with his wife Susie.

It was in the morning and they had just stopped at Bojangles off Highway 42 in Johnston County for a breakfast sandwich. Their next stop was the nearby Marathon gas station.

That's where his wife wanted to buy some scratch-off tickets. She did and then the clerk turned to them with some big news.

"He said, 'Dennis, I believe you guys won $4 million,'" recalled Morian. "I really had no intentions of retiring next year but it just kind of happened."

Morian just recently turned 60-years-old. He served in the U.S. Marines and he's a father and grandfather.

He said they plan to vacation a little but donated some of their winnings to the Ronald McDonald House charities in honor of a granddaughter they lost. They also plan to donate money to their church.

A North Carolina woman hit the jackpot with two scratch-off lottery tickets, marking the second such instance in three weeks.

When she scratched the second Million Dollar Fever ticket, she realized she had, in fact, beat the odds and won $1 million.

She received her first payment of $50,000. After required state and federal tax withholdings, she took home $34,753. She will get an additional payment each year for the next 19 years.

While these stories may have people running to their nearest convenience store to start scratching off some winners, the state's lottery commission said there are some odds to consider.

How to play and odds of winning

For example, one of the recent winning games played was the Diamond Dazzler for $4 million.

"In the $4 million Diamond Dazzler, of course, the top prize is $4 million and we have three of those in that game," explained Cheek. "We also have six $1 million prizes and 175 $10,000 prizes, so the odds of winning on that ticket including break-even prizes are 1 in 2.98 (million)."

But they point out that the approximate overall odds of winning, including break-even prizes, are 1 in 2.98.

------------------------------------
ABC11 has decided to slowly reduce the number of stories on the website that have a comments section. We believe very strongly that our audience should have an opportunity to discuss and debate events in our world, however, we have not been able to moderate the comments as well as we would like. Instead of hosting a platform that could allow a few loud and ugly voices to dominate a conversation, we want to encourage everyone to join us on our social media platforms and speak out there. Facebook: facebook.com/ABC11 Twitter: twitter.com/ABC11_WTVD
Report a correction or typo
Related topics:
personal financegarnermoneylottery
Copyright © 2022 WTVD-TV. All Rights Reserved.
TOP STORIES
Local law students react to swearing in of Ketanji Brown Jackson
Homeownership becoming more expensive in the Triangle
RDU gears up for busy July 4th holiday passengers
Governor Cooper signs bill that keeps hemp industry lawful
Raleigh woman named in long lost Emmett Till case warrant
Misdiagnosed 'miracle baby' improving thanks to last-minute treatment
Wake First Responders, Officers, Volunteers honored with CIT awards
Show More
FBI raids Fayetteville church accused of operating as a cult
Durham's East End Connector opens after construction delays
Cruise ship hits iceberg in Alaska, returns to Seattle for repairs
ABC11 to present Raleigh's July 4th fireworks show at Dix Park
Jackson sworn in as 1st Black woman to sit on Supreme Court
More TOP STORIES News