Deputies fired as many as 33 rounds at Lynwood suspect 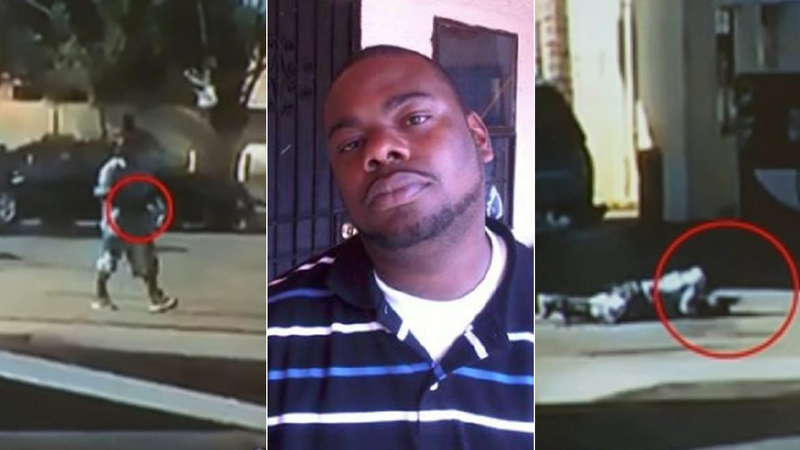 Deputies fired as many as 33 rounds at Lynwood suspect

LYNWOOD, Calif. -- The two deputies who shot and killed a man who was reportedly firing a gun into the air in Lynwood fired as many as 33 rounds at the suspect, investigators said.

The Los Angeles County Sheriff's Department held a news conference Sunday to address the fatal shooting. They identified the suspect as 28-year-old Nicholas Robertson of Lynwood.

Sheriff homicide Cpt. Steven Katz said there were multiple 911 calls made from the area of Long Beach Boulevard and Magnolia Avenue shortly before 11 a.m. Saturday regarding an armed man.

Some callers described Robertson as armed, while some said he actually fired a gun into the air.

Katz said witnesses reported he fired six to seven shots in the air and briefly went into a car wash and a pizza parlor before the deputies arrived.

Two deputies arrived on scene and gave Robertson repeated orders to put down the gun, which he did not comply with, officials said. That's when the deputies shot and killed him.

During the news conference, sheriff's investigators released two still images of Robertson before the deputy-involved shooting took place. In the photos and video, Robertson appears to be holding a gun.

They also released video shortly before the shooting and of the shooting. Similar footage was also captured by an eyewitness who asked to remain anonymous.

It shows Robertson walking away from deputies when several rounds are fired at him. He is seen injured, crawling on the ground. Deputies fired more shots.

One of the deputies fired 17 rounds and the second deputy fired 16, officials said at the news conference, which adds up to a total of 33 bullets.

The two deputies were described as veterans with the force. Their names were not released, but Los Angeles County Sheriff Jim McDonnell said the two have been reassigned from field duty and will remain so until the shooting investigation is complete.

Sheriff's officials said there is no evidence at this time to show that Robertson ever fired his weapon at deputies. Following the deputy-involved shooting, a .45-caliber semiautomatic gun was found at the scene.

Specifically, sheriff's officials said the gun was found under Robertson and that he had two additional rounds of ammunition "within his grasp" just inches from his fingers, and that there were no live rounds left inside the weapon, which was not registered to him.

"When he collapsed, his arms were underneath him and the gun was still in his hand. There was never a time when the weapon was not in his possession," Katz said.

Authorities said they have some intel about a possible "domestic discord" between Robertson and his spouse "that may have been a factor that agitated him to some degree," but they said this has yet to be verified.

McDonnell promised the investigation would be handled "with the utmost professionalism and integrity" and urged anyone with information to come forward.

"In this modern age of cellphone video and instant analysis on the Internet, I would ask that we keep in mind that a thorough and comprehensive investigation is detailed and time intensive," he said in a statement. "It will involve, not just one source of information, but numerous sources, potentially including multiple videos, physical evidence and eyewitness accounts."

Robertson's relatives said he was married and a father to an 8-year-old girl and 7-year-old twins. Many people in the area said the shooting was "unjustified."

Family members said they don't know how they are going to explain to his children why he is no longer around. They hope the eyewitness video will lead to a criminal prosecution.