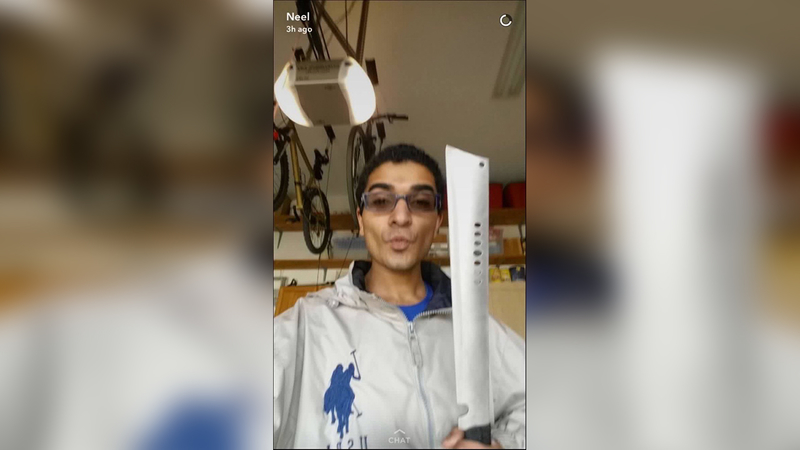 APEX, North Carolina (WTVD) -- The man seen viciously attacking a teenager with a machete in an Apex neighborhood Thursday had been planning the attack against the girl for weeks, according to authorities.

The attack happened around 3 p.m. in the 1800 block of Venezia Way, near Abruzzo Drive.

Police Chief John Letteney said when police arrived they found 18-year-old Priyanka Kumari lying on the ground suffering from serious injuries. They said it appeared the girl had just gotten off the school bus and was walking down a sidewalk when 20-year-old Neel Salil Mehta came up and attacked her.


During his first court appearance Friday morning, Mehta appeared calm as a prosecutor told a judge that Mehta had been thinking about attacking the Holly Springs High School senior "for at least a couple of weeks."

It was also revealed that following his arrest, Mehta admitted to the attack because Kumari would not return his calls, emails, or text messages.

The prosecutor also said an investigation uncovered that Mehta had been stalking Kumari and had sent threatening emails.

The prosecutor went on to say Kumari suffered wounds to her face, neck and hands, and that she has already had undergone one surgery and could face more.

Mehta, of the 600 block of Halcyon Meadow Drive in Cary, has been charged with assault with a deadly weapon with intent to kill inflicting serious bodily damage, but the prosecutor said Friday that the state is planning to upgrade the charges to attempted first-degree murder - calling the incident "horrible."

Apex Police said Friday that the case will be presented to the grand jury next week.

Frantic witnesses described the scene to 911.

The prosecutor said that a witness called 911 and told the dispatcher that it appeared the man was attempting to "saw off" the victim's head.

In 911 calls released by authorities, one caller said Kumari was "bleeding profusely."

Caller: "There's a guy assaulting a girl and he's got a knife and he's cutting her and she's bleeding and she's gonna die."

Caller: "I'm watching, yes ... he's stepping on her throat, he's trying to kill her. He's slicing her head, he's beating her up."

The prosecutor also said that when police officers arrived at the scene, they observed Mehta standing over Kumari and "saw him swing the machete and strike the victim in the neck."

An eyewitness, who lives on Venezia Way and does not want to be identified, said he was in his home when he noticed a man he didn't recognize with a tan coat walking around the neighborhood. He said he didn't think anything of it until he heard what sounded like a fight.

He assumed the fight was between two high school students since school buses are usually dropping students off at that time.

He grabbed a two-by-four, ran outside and found a man beating a young woman. He said he yelled out and backed off when he saw the man had a machete. He said the suspect was not deterred by his presence and kept attacking the girl. The man described the attacker as "relentless."

RELATED: Student attacked with machete in front of an Apex home

He said another neighbor called 911.

A neighborhood kid also described seeing a man in a tan coat walking around. When he got off his school bus he said the man asked him if he was coming from Holly Springs High School. The boy told him no and kept walking, saying he had a bad feeling. This conversation, he said, happened about 20 minutes before the attack.

The teenaged victim is expected to recover from the attack.

Chief Letteney said when officers arrived on scene, Kumari was on the ground and Mehta dropped the machete when officers confronted him. He was immediately taken into custody. He was also treated for minor, self-inflicted injures sustained prior to police arrival.

Police said they've obtained cell phone video of the incident and are reviewing that as part of their investigation.

Another family friend who also wished not to share her identity said she knows the family well.

She said Kumari used to go to Green Hope High School in Cary when she was a sophomore and that's when she met Mehta.

Mehta has been placed under a $2 million bond and ordered to be on house arrest if released. He was also ordered to stay away from the victim. Mehta has requested a court-appointed attorney.