Mail carrier works to save Christmas from fire in Wake Forest 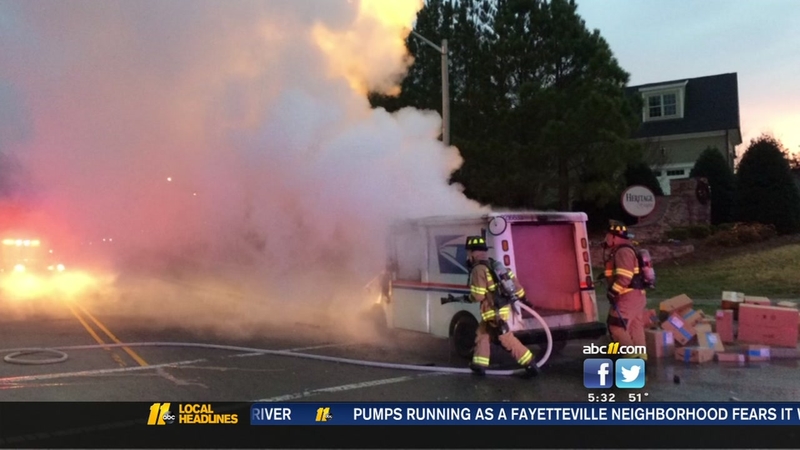 Heroic effort to save packages after mail truck catches fire

The blaze started in the engine area and quickly spread to the rest of the vehicle.

The driver got out and, with the help of a passerby, managed to save most - but not all - of the packages on board.

The damaged packages got wet, but not burned.

The mail carrier was not hurt.

"We were all just wondering and making sure she was okay," said eyewitness Sandra Mastro Marino.

"The woman was obviously very concerned about the packages. She did a heroic job of trying to save the packages first, especially at this holiday season," said Harper.

Firefighters put the flames out within minutes.

"If it wasn't for her quick thinking to pull right over and remove the parcels, it could have been tough," said Wake Forest Fire Battalion Chief Ed Barrett.

He praised the mail carrier and the Good Samaritan for their swift action.

"Somebody did save Christmas," said Barrett.

Postal Service officials said if an item was damaged, it will be returned to the shipper for repackaging and will be redelivered later this week.

Customers with questions about missing or recently mailed packages can call (336) 668-1307 for information.

"Fortunately our carrier was not injured and only a small amount of packages got wet due to firefighters' efforts to save the vehicle. Those packages will be returned to the shipper today for repackaging and delivered this week. We are grateful for the quick response of the fire department." said Philip Bogenberger, a spokesman for the US Postal Service.

Grateful residents have set up a GoFundMe page for the mail carrier to buy her something nice for Christmas.