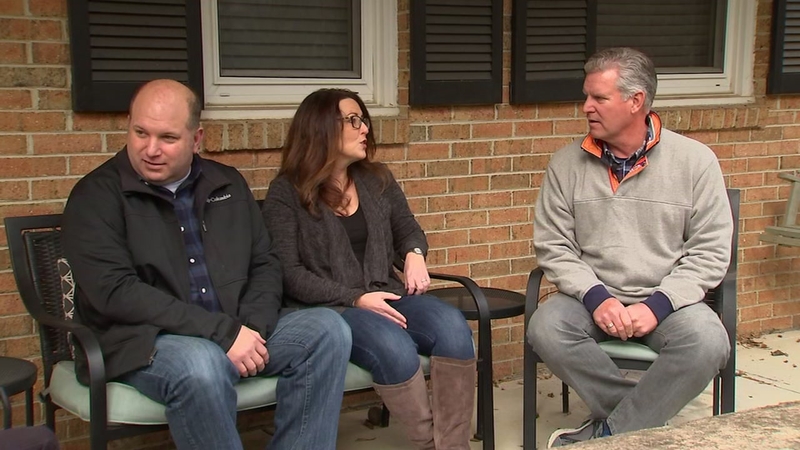 CARY, N.C. (WTVD) -- A mailman delivered a miracle to one Cary family by stepping up and helping save a man's life just in time for Christmas.

It was Christmas Eve afternoon when USPS employee Chris Petersen was in Cary making his usual rounds delivering mail.

Petersen told ABC11 he wanted to be done with work earlier to be home with family but was running late delivering packages instead.

Petersen was on Pamlico Drive and just finished dropping off mail to the Hodgin family when a woman cried out for help. Pam Hodgin yelled out that her husband had collapsed in the family's kitchen.

Mike Hodgin lay on the floor of his home unresponsive, for "about two minutes."

That's when Mailman Chris' CPR training from nearly 30 years ago kicked in and he began to perform chest compressions on Hodgin.

Jason attempted to get Mike's attention by calling for him to wake up. Joannie did her part in comforting Pam and calling 911.

A Cary homeowner suffered a heart attack on Christmas Eve seconds after mailman Chris Petersen (right) delivered their mail. He ran inside the home and began CPR. The other two, Jason & Joanie, helped as well. Together, they saved a neighbor’s life. #ABC11 pic.twitter.com/JAk5pHa5wU

"I was running late, I believe, (because) I was meant to be at that spot at that time," Petersen said. "A bad thing occurred. But through the efforts of people who were able to keep our heads in the right place at the right time, the outcome was a good one."

Petersen said he refers to his customers as "my people." He said he walks about 8 to 9 miles a day delivering mail because he enjoys interacting and getting to know people in the neighborhood.

"Chris acted so fast and likely saved (Hodgin's) life," Joanie told ABC11. She said Hodgin suffered an "electrical event." More specifically, a medical emergency that leaves victims with a 5 percent survival rate. As crews began to leave, Joannie said one of the EMT crew members cleaned up the kitchen before leaving.

Once paramedics had it under control, Petersen returned to his undelivered mail, which sat in his pushcart in the Hodgin's driveway, and continued with his route.

Hodgin was taken to the hospital and is still under medical care.