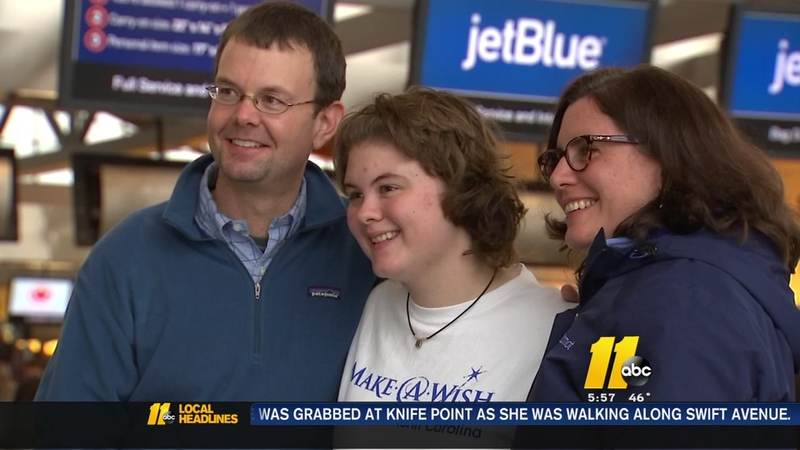 Margaret Stoffregen is in remission now, but it wasn't always easy for her and her family to have hope.

Now the family is going the Big Apple, and it's a Christmas wish come true for 14-year-old in the wake of her battle with cancer - a battle that's even cost her part of her leg.

"The reason that I wanted to go to New York was to see the Nutcracker," Margaret said.

ABC11 caught up her and her family before the trip of a lifetime. The teenager is a huge fan of the Nutcracker at the Carolina Ballet, and goes every year, so this is a big deal for her.

"This is tremendous," her father, Eric Stoffregen said.

He said the trip is a celebration after a long battle with Osteosarcoma - which is a cancer that attacks the bones.

"We found out from a fractured leg that I had a tumor in my knee," Margaret said.

"To realize at a very young age that you have cancer, and that you're going to lose one of your limbs, and have to recover from that mentally, physically - it's incredible what she's been through," Eric said.

"These children are losing a piece of their childhood because of the medical conditions that they're facing and all the treatments that they have to go through," Jerry Peters, Vice President of Make-A-Wish Eastern North Carolina said. "So what this wish does is help repair that."

Margaret and her family said that's exactly what it does and the teenager is sharing her story of hope and survival with the nation on GMA Friday, on ABC11 at 7 a.m.

If you want to help the Make-A-Wish campaign, you can drop off a letter for Santa Claus at Macy's. The store donating $1 to the foundation for every letter they get, and they're doubling that donation on Friday. It's all part of their Believe campaign, a campaign that helped Margaret's wish come true.