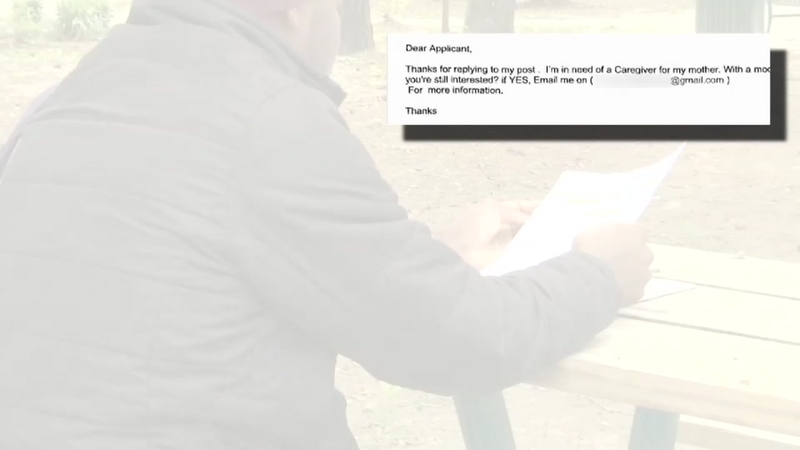 SPRING, Texas -- One man's job search turned into a financial nightmare after he realized he was scammed out of a couple thousand dollars.

The man, who did not want to be identified, explained that he thought he was doing what was required of him to solidify the job, but instead, now owes the bank a pretty big sum of money.

"I lost some money and now I need to take money from my college fund to pay the bank," the man said, who is currently working his way through college.

The man claims he was looking for jobs on the website "Indeed" when he received an email from someone he thought was a potential employer.

The subject line of the email referenced his Indeed application, but the sender was using a Gmail account. The victim claims it wasn't until after he was scammed that he noticed these two major details.

"This guy contacted me and said he works with the United Nations Development Programme and he is always out of state and he needs somebody to take care of his mother," the victim said.

The emails began on March 30 and eventually led to a fake employer contract and a check for more than $2,700.

The victim said he was instructed to deposit the money into his bank account and then withdraw $2,200 and deposit that into a designated account.

"So, I took the money to Capital One and deposited the money into that account, and everything went through and the next day I got a notification from the bank saying the money was returned," the man said.

The man is now faced with the burden of figuring out how to pay the money back to the bank and said he hopes by sharing his story, he can help others avoid being scammed.

"Indeed's mission is to help people get jobs, and the quality of the job advertisements posted by third parties on our site is central to our mission. Indeed has a team dedicated to the Search Quality effort, and employs a variety of techniques to review third party job advertisements that are posted on Indeed to determine their suitability. Indeed reserves the right to remove any job postings that do not meet our standards and we encourage job seekers to report any suspect job advertisements to us, or if they feel it necessary, to make a report to the police. Jobseekers should never agree to send payment to a potential employer, and charging fees is a violation of Indeed's rules for companies posting on our site."
Report a correction or typo
Related topics:
springcrimelawsuitscamcareers
Copyright © 2021 KTRK-TV. All Rights Reserved.
More Videos
From CNN Newsource affiliates
TOP STORIES