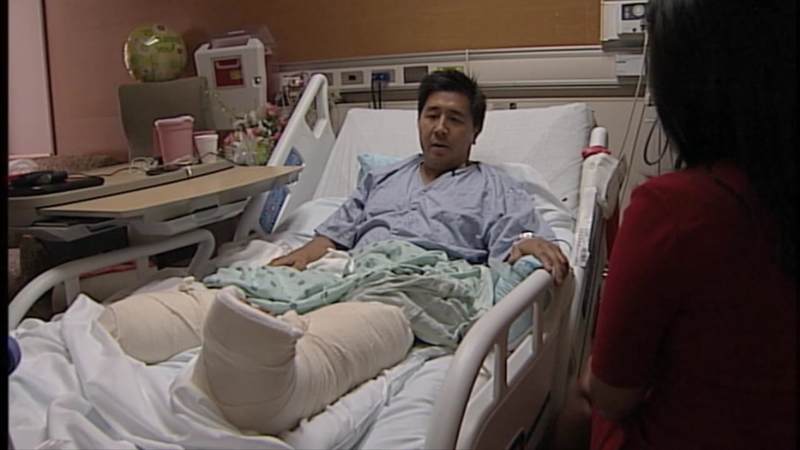 HONOLULU, Hawaii -- A man in Hawaii is sharing a miraculous story of survival. Doctors say he was minutes away from death, being attacked by a massive shark, but his will to live was even stronger.

Tony Lee, 44, was attacked over the weekend off the coast of Lanikai.

"Just out of nowhere, I felt a yank on my legs and that was surprising. And I looked back, and that's when I saw the shark, and I couldn't believe it," Lee told ABC affiliate KITV. "He was a big guy and he had both my legs in his mouth."

The shark kept pulling him underwater, but Lee put up a fight.

"I had goggles on, so I could see things really clearly, and I kept thinking that if I just kept punching him he would let me go," said Lee. "He pulled me down one last time, so I just reached out and put my finger in his eye and pulled out his eyeball. And so he let go. So I got to the surface. I was holding his eyeball. So I let it go and was treading water."

A father and son, who happened to be in canoes nearby, heard Lee's screams and came to his rescue, paddling him back to shore.

"I could feel the blood leaving my body, and there was a big trail. And the kayakers told me they saw a big blood slick going back," said Lee. "I really thought I was dead there. I mean the guy was paddling as hard as he could but we were pretty far from shore."

Lee survived the attack, but he lost one foot and will undergo surgery to save the second. Lee's an avid athlete, and doctors say that will help in his recovery. He says he looks forward to getting back to hiking and biking.

It was pure chance that Julian Liverton and his son Charlie were there, our sister station KGO-TV reports. They had been catching waves in their one man canoes by the Mokuluas, when Julian's boat got a crack in it. As they headed back, they heard Lee's screams.