Man stabbed to death near Penn Station; 2 sought in connection with attack 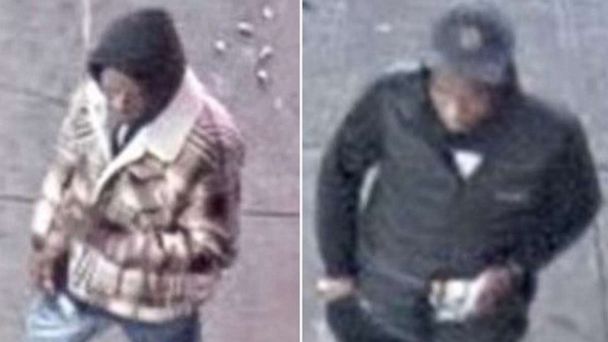 A man was fatally stabbed near New York's Penn Station on Thanksgiving, said police, who are now seeking two people in connection with the attack.

The incident occurred around 6 p.m. Thursday near the busy rail hub, hours after people packed the area for the Macy's Thanksgiving Day Parade.


Officers responding to a call of an assault found a 36-year-old man who had been stabbed in the chest, the New York Police Department said in a statement.

The victim, who appears to have been homeless, was transported to Bellevue Hospital where he was pronounced dead. He's not yet been identified, pending family notification.

No arrests have been made and the investigation is ongoing, police said.


On Thursday, the NYPD released surveillance photos of two men wanted in connection with the homicide. Police are seeking the public's help in identifying them.

This is the second fatal stabbing in a week near Penn Station. Early Sunday, a 32-year-old man died after he was stabbed in the neck while aboard a 2 train near the station, police said. A suspect is still being sought in that homicide.
Report a correction or typo
Related topics:
abc newsnational
Copyright © 2022 ABC News Internet Ventures.
TOP STORIES
Many seek N95 masks amid high COVID cases
GoRaleigh bus crashes on Glenwood Avenue
School closings and delays
After the omicron wave, what's next for the COVID pandemic?
Delay opening Monday at COVID-19 testing sites
Mostly Sunny, Little Warmer Tomorrow
One person injured in Raleigh shooting, police investigating
Show More
Wake school board holding meeting Tuesday
Tax filing season starts Monday. What to expect for 2022
Aerial views of Triangle area covered in snow
Rescuers use sausage dangling from drone to lure runaway dog to safety
UNC police investigating armed robbery
More TOP STORIES News