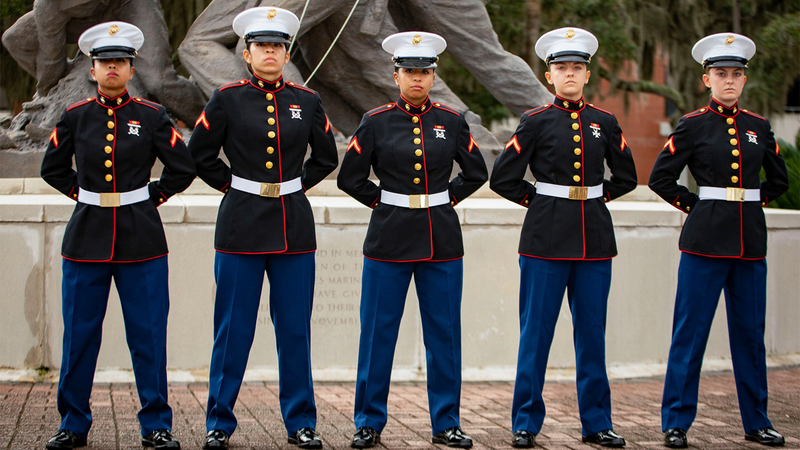 The US Defense Department called the five "sisters by blood, now sisters-in-arms."

Ashley Valentine, 19, and her sister Amber, 22; and Maria Placido Jaramillo, 21, and her sisters, identical twins Vanessa and Melissa, 22, all graduated on Nov. 14.

A Missouri father's newest haircut is getting a lot of attention across the country.

According to a Facebook post from the Marine Corps Recruit Depot in Parris Island, Ashley Valentine made a promise to her grandfather "to carry on his legacy in the United States armed services" three days before he died.

After she decided to join the Marine Corps, her sister Amber made the decision to enlist as well.

The Virginia natives said having each other to rely on through recruit training helped during some of their highest highs and lowest lows.

"I went through a moment during first phase where I received some bad news in a letter, and she was there to be a shoulder for me to lean on," Amber said.

When Maria, Vanessa and Melissa Placido Jaramillo were young children, they made a pact to join the military together. They were born in Panama and moved to Las Vegas at a young age.

All their journeys started with the ROTC program but it was Maria who first spoke with a Marine Corps recruiter.

The sisters said during recruit training, they kept each other's spirits up.

"When one of us is lacking and the other is strong in that area, we always push each other to become to best we can be," Melissa said.

All three plan to complete their education and become naturalized as American citizens.

An East LA family of four moved out of a shed and into an apartment after their 8-year-old started his own plant business.