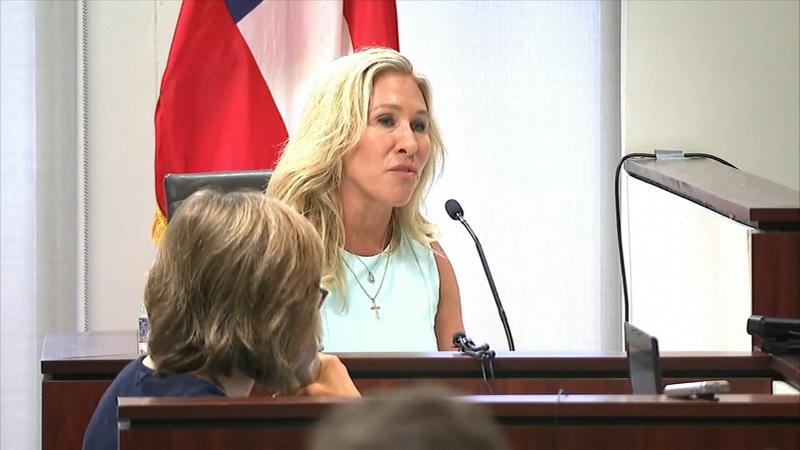 ATLANTA -- Republican Rep. Marjorie Taylor Greene of Georgia testified for more than three hours Friday during a hearing where challengers are seeking her disqualification as a candidate for reelection, citing her role in the January 6 insurrection, CNN reported.

The challengers repeatedly highlighted how Greene had posted messages and videos on social media in the run-up to January 6 that used strident rhetoric. According to the challengers, these posts helped fuel the attack on the Capitol and therefore, she aided the insurrection.

But Greene's testimony did not establish that she planned for violence or coordinated with anyone who rioted on January 6. That hole in the challengers' case could significantly undermine their chances of disqualifying Greene, because they need to prove that she engaged in insurrection.

Greene said she didn't remember if she had ever spoken with any GOP lawmakers or White House officials about the potential for violence on January 6. She also said she didn't recall if she herself had posted a handful of tweets that appeared on her account, where she claimed the 2020 election was illegitimate.

And she said she didn't remember saying that she opposed the peaceful transfer of power to Joe Biden -- right before lawyers for the challengers played a video of her saying that.

The congresswoman said that she "had no knowledge of any attempt" to illegally interfere with the counting of electoral votes on January 6. Greene also testified that she had never advocated for then-President Donald Trump to invoke martial law during her meetings with him before January 6.

The firebrand GOP lawmaker was in the courtroom with one of her close congressional allies, Republican Rep. Matt Gaetz of Florida, who sat with her legal team. Greene walked in to a rousing applause and cheers from the crowd assembled in the courtroom. A court security official quickly chastised the room and said outbursts would not be tolerated.

Greene also pushed back against challengers' questioning from the witness stand.

Andrew Celli, lawyer for the challengers, asked her, "Did you like a post that said, 'it's quicker that a bullet to the head would be a quicker way to remove Nancy Pelosi from the role of speaker?' " A CNN review in 2021 of hundreds of posts and comments from Greene's Facebook page showed she repeatedly indicated support for executing prominent Democratic politicians in 2018 and 2019 before being elected to Congress in 2020. That review included one post from January 2019, in which, Greene liked a comment that said "a bullet to the head would be quicker" to remove Pelosi.

"I have had many people manage my social media account over the years," Greene responded to Celli's question Friday. "I have no idea who liked that."

She said that she never intended to promote any violence and that she didn't recall any conversations with lawmakers or White House officials about the possibility for the pro-Trump protests to turn violent.

"I only believe in peaceful demonstration," Greene said. "I do not support violence."

"We saw a tremendous amount of voter fraud," Greene said, repeating a debunked claim that has become a rallying cry among Trump supporters.

Greene's lawyers briefly questioned her as well, and they focused on the fear she felt while being escorted to safety during the attack. She was on the House floor, objecting to Biden's electoral votes, when the pro-Trump mob breached the building and rummaged through the Capitol.

"i was scared," Greene said. " I was concerned. I was shocked... I had no idea what was going on... I did not want to see anyone get hurt. It was very upsetting. I was very upset."

The outcome of this case will reverberate beyond Georgia, because similar challenges are pending against other Republican officials and could be lodged against former Trump if he runs again in 2024.

Origins of the case

The case revolves around a Civil War-era provision of the Fourteenth Amendment, which says any American official who takes an oath to uphold the Constitution is disqualified from holding any future office if they "engaged in insurrection or rebellion against the same, or given aid or comfort to the enemies thereof." But how this applies to today is a hotly debated legal question.

Lawyers for the challengers argued Greene "helped facilitate violent resistance" against the US government, and said they will use her own words against her, such as her strident rhetoric in the run-up to January 6 that urged people to oppose the peaceful transition of power and to have a "1776 moment."

"This was not the type of insurrection where the leaders were standing in Richmond, Virginia, giving long-winded speeches to justify the name," said Ron Fein, a lawyer for the challengers, form the legal advocacy group Free Speech For People. "Rather the leaders of this insurrection, of whom there were a number, were among us on Facebook, on Twitter, on corners of social media that would make your stomach hurt. The evidence will show that Marjorie Taylor Greene was one of them."

Several of Greene's constituents in her northwest Georgia district initiated the challenge last month with backing from a coalition of liberal activists and constitutional scholars. They claim Greene aided the insurrection by promoting voter fraud myths, posting videos before January 6 railing against the peaceful transfer of power, and allegedly coordinating with protest organizers.

The anti-Greene challenge is backed by Free Speech for People, a legal advocacy group, and Our Revolution, the left-wing group founded by Sen. Bernie Sanders. Greene, who has become infamous for peddling far-right conspiracies, has found support from some conservative legal experts and from Trump himself, who released a lie-filled statement praising her on Thursday.

The burden of proof will be on the challengers, to show by a "more likely than not" standard that January 6 was legally an insurrection, and that Greene helped the insurrectionists. State Judge Charles Beaudrot presided over the administrative hearing and will issue a recommendation to Georgia Secretary of State Brad Raffensperger on whether Greene should be disqualified.

Greene's lawyer James Bopp Jr., in his opening statements, condemned the proceedings and said that Greene's constitutional rights were being violated. He also said Greene would be significantly harmed if she is disqualified before the May primary, only to win an appeal later on, after the election was held.

"Our democracy is at stake. It should not be, it should be the voters, not government employees, public officials, judges and lawyers, who decide our elections," Bopp said. "Voters have a right to vote for the candidate of their choice, unless there was very compelling legal, not rhetorical justification for that. Third, and which is not present here."

Greene can appeal Raffensperger's decision in state courts. She has vehemently denied any wrongdoing regarding the insurrection at the US Capitol, maintains that she "never encouraged political violence" and says she wasn't involved in planning any protests. Her lawyer told CNN that he thinks Friday's hearing is a "show trial" and that the entire procedure is an egregious violation of her rights.

It's notable that the disqualification hearing is even happening. Greene filed a federal lawsuit to shut down the state process -- which is how GOP Rep. Madison Cawthorn fended off a similar candidacy challenge in North Carolina. But in a blistering 75-page ruling on Monday, a federal judge rejected many of Greene's legal arguments and allowed the state case to move forward.