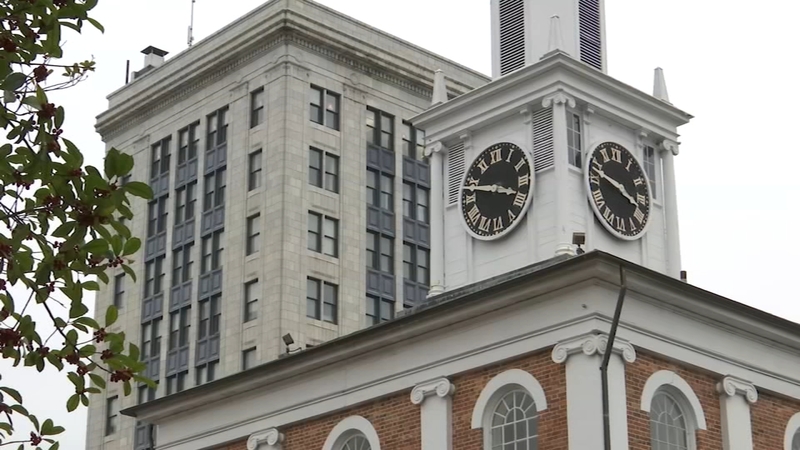 FAYETTEVILLE, N.C. (WTVD) -- As Fayetteville city leaders continue to discuss the fate of the historical Market House, a large group of the community has voiced their support to see the building remain in place.

During a January 27th special meeting, the city council passed a motion to look into two options: relocating the building or repurposing it.

Both options that Dawn Adkins-Hurley, a long-time Fayetteville resident, and other community members see as a threat to the National Historic Landmark.

Adkins-Hurley has been a strong advocate for protecting the Market House, since there were calls to tear it down during the George Floyd protests in the Summer of 2020. "To take the history of a building that is almost 300 years old and to hold it accountable for a very small segment of time, 33 years out of 200."

Adkins-Hurley and others have created Facebook pages for other supporters of the building to speak and share their thoughts. During a Monday night city council meeting, the Fayetteville local called into the public forum and expressed her desire to see the Market House preserved, personally handing Mayor Mitch Colvin a petition with more than 2,000 signatures.

"I think if they would broaden their... where they're looking, who they're listening to, that they might see a different picture," Adkins-Hurley told ABC11.

On the other hand, many community members like local activist Myah Warren want to see the building torn down. "In my personal opinion, I do believe that the Market House should be removed, not repurposed, not replaced, but removed."

For many people, within the Black community, the building stands as a symbol of a time where African Americas were sold.

"This building is a part of our history, that this building offends us; it makes us feel some type of way. So, why can't we do what we feel is necessary to let our voices be heard about our particular history in this building?" Warren said.

Adkins-Hurley and her "Support the Market House" group understand the outcry but believe the building is more than its dark past, advocating for education for the wrongs committed.

"I respect that. I empathize with that, but they need to look at the other histories too," Adkins-Hurley added. She goes on to say that their mission isn't motivated by race or politics but the desire to preserve the historical landmark.