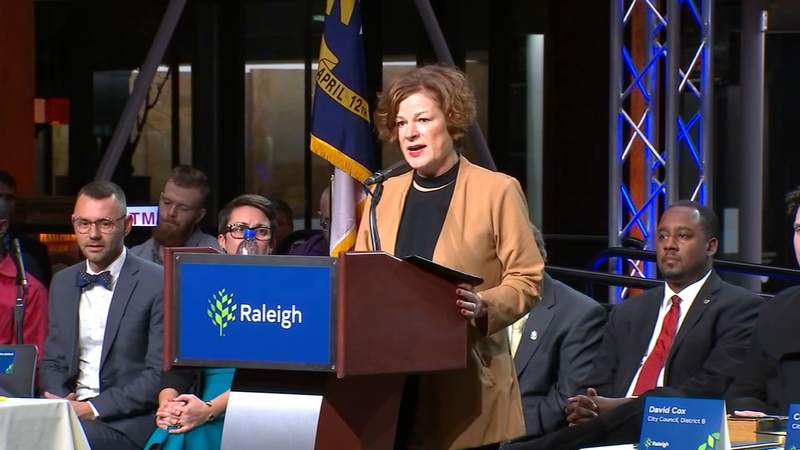 RALEIGH, N.C. (WTVD) -- While her voice may have been weakened by a bout with laryngitis, minutes after Mary-Ann Baldwin was sworn in as Raleigh's 36th mayor, she spelled out a vision she hopes can make a big splash.

"I do promise you, it's going to be big. It's going to be bold. And we will need your support," Baldwin told the hundreds gathered inside Raleigh Union Station for the swearing-in-ceremony.

Calling it a quality of life initiative, the new mayor called for a city-wide bond referendum next November. Her plan is to ask Raleigh taxpayers for the cash to fund phase 1 of the $150-million Dix Park build-out. The bond proposal would also include new "equitable" funding for parks and greenways. Along with money to support housing affordability, a main issue of the campaign.

Baldwin was not ready to offer specifics, including a price tag.

"We don't know (how large the bond amount will be) yet," she said to ABC11 after her address. "But we will be polling. We'll be working with the community. And we're looking for input."

With five new members, younger and more progressive, including the city's first openly-gay councilors, some are referring to the new-look city council as a changing of the guard.

Northeast Raleigh Council Member David Cox was the only candidate of the council's former voting majority to survive re-election. And in the hours after the polls closed in October, Cox posted on Facebook, that Baldwin's election along with a "pro-development" board was "devastating."
In an interview with ABC11 after Monday's swearing-in, Cox said in the weeks since election night, he's had the chance to meet personally with his new colleagues and found many commonalities. But, he didn't back down from his opinion that a "pro-development" council agenda could devastate some parts of the city.

Mayor Baldwin seemed eager to build bridges, telling us she will announce on Tuesday that Cox will serve as vice-chair on a committee that she will chair.

"I think (Cox) spoke from a point on emotion and I can understand that," Baldwin said about Cox's Facebook post. "But, yes we have reached out to him and we have included him. We're going to be very deliberate in bringing him in. I feel very strongly that we need to hear voices."

Only time will tell how this new younger more progressive majority gets along with the old guard. But we should start getting a better idea soon of what this bond referendum will include and how much it's going to cost.