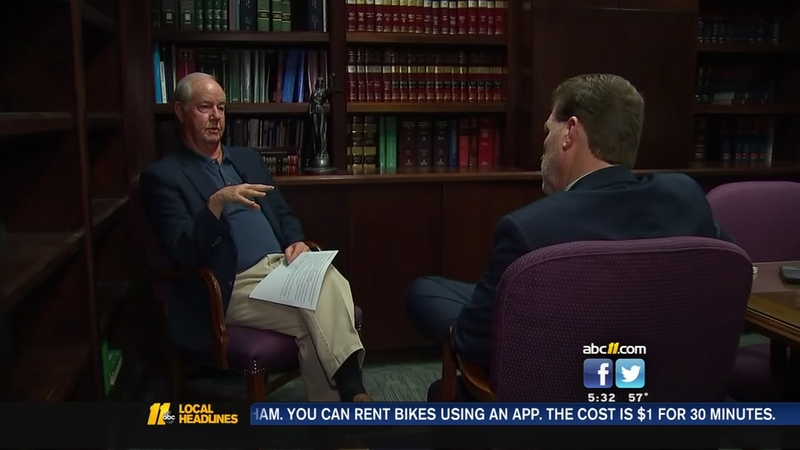 And now we've learned that the arrests are part of a state-wide crackdown on prostitution and human trafficking - with Wake County at the epicenter.

The latest arrests were made by Raleigh police, but over the past year, dozens of arrests have been made all over Wake County including in Apex, Cary, and Knightdale.

The legal counsel for the North Carolina Board of Massage and Bodywork Therapy, which licenses masseuses, said the clean-up effort has been a long time coming.

"We have seen an influx in the last 10 years of more of the Asian massage business; and mostly, primarily Chinese," Charles Wilkins told ABC 11.

On Tuesday. Raleigh police raided a residence at Sterling Glenwood Apartments in Crabtree Valley and charged 38-year-old Qianliang Chen and 29-year-old Bin You with the misdemeanor practicing massage without a license.

But most of the arrests in the past year have taken place at businesses in strip malls like the recent bust of the Foot Massage Spa and two others massage parlors in Knightdale.

A Knightdale police search warrant - made public this week - details the undercover operation that utilized a former law enforcement officer as a confidential informant.

It's possible that informant is the same private investigator hired by the massage board.

The search warrant indicates police believe the businesses are just fronts for prostitution and human trafficking.

The attorney for the massage board confirms that its investigation shows many of the woman arrested are Chinese immigrants who only wanted to seek a better life in the United States, but unknowingly got mixed up with organized criminals from the Asian nation.

"They are beholding to whoever got them here," Wilkins explained. "And they may think they are going to be a nanny or something, they end up being a prostitute."

A number of those arrested in the crackdown list addresses in Flushing, New York.

Wilkins said there's evidence that runners there take the recent arrivals from China and "...tell them to get on the bus and come to Cary, North Carolina. And they'll meet them at the bus station, they'll take them to a place, and put them to work."

And when the women arrive, he said they are easy to manipulate in part because of the language barrier.

"They keep them under control because they're in a place where they can't speak English," Wilkins said. "They are encouraged not to speak to other people. Certainly, you don't go to law enforcement because they might get deported."

Wilkins said the legislature recently gave the massage board more power to fight the illicit businesses by passing a law that allows the board to not just license individuals but entire businesses.

Under the old law, even though the board would revoke the licenses of individual masseuses, the businesses they worked for would just hire someone new and keep operating.

Now the board has the power to shut down the business which by one estimate bring in $180,000,000 in North Carolina alone.

--------------------------
ABC11 has decided to slowly reduce the number of stories on the website that have a comments section. We believe very strongly that our audience should have an opportunity to discuss and debate events in our world, however, we have not been able to moderate the comments as well as we would like. Instead of hosting a platform that could allow a few loud and ugly voices to dominate a conversation, we want to encourage everyone to join us on our social media platforms and speak out there. Facebook: facebook.com/ABC11 Twitter: twitter.com/ABC11_WTVD
Report a correction or typo
Related topics:
wake countyarrestprostitutionsex traffickinghuman traffickingwake county news
Copyright © 2022 WTVD-TV. All Rights Reserved.
TOP STORIES
Clayton police arrest man in shooting leaving 1 person injured
Wake County begins giving COVID booster shots for children ages 5-11
Biden: Monkeypox threat doesn't rise to level of COVID-19
Pfizer: COVID vaccine for kids 6 months to 5 years old 80% effective
Zibanejad leads Rangers to 3-1 win over Hurricanes in Game 3
Russian sentenced to life in Ukraine's 1st war crimes trial
1 person in hospital after a pedestrian was hit crossing I-95
Show More
Event for Ukraine raises money for paramedics on frontlines
78,000 pounds of infant formula arrives in US
Barber attempts to cut concerns about violence in Durham
12-year-old girl escapes burning Cary home
Texas woman sought in fatal shooting of pro cyclist: US Marshals
More TOP STORIES News