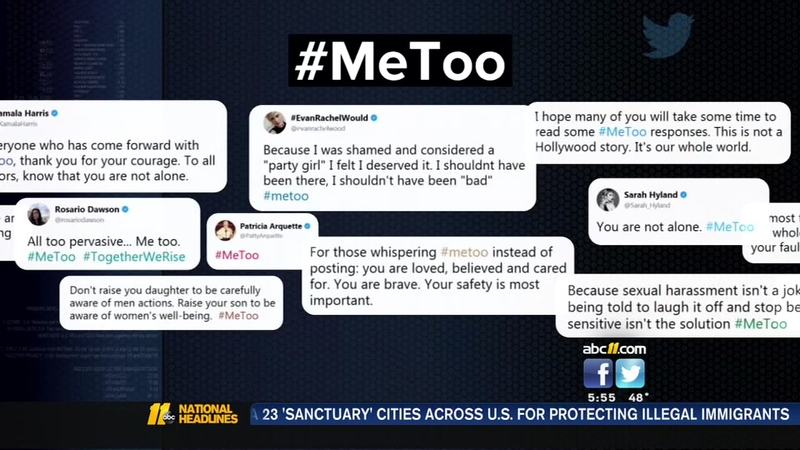 RALEIGH, NC (WTVD) -- Since the "MeToo" movement started, Interact of Wake County, which offers domestic violence and sexual assault services in Wake County says it has seen an increase in reported cases - as much as 70 percent.

"Well safety is an important and powerful motivator of individuals who have suffered sexual or interpersonal violence because that's related to power and control and humiliation and dominance rather than sexual acts," Cher Durham said, the sexual assault services director at Interact of Wake County.

"It's not just happening now that these people are talking about it," said Communications Director Christina Brewer. "It's happening because it's always happened, and it will continue to happen ... ultimately we want to end that cycle and it starts with the awareness."

If you are a survivor of sexual assault you can receive help and counseling from Interact of Wake County here. Call the 24-7 sexual assault crisis hotline at (919) 828-3005.

ABC11 asked Interact of Wake County to crunch the numbers, and it said it has had a 70 percent increase in the number of people reporting sexual assault when they looked at the time between October 2017 (when the "Me Too" movement began) and now, then compared that to the same time last year.

That increase is popping up through their social media channels as well.

"People probably five to six times a week are reaching out directly to say 'I need help, I need support,'" Brewer said.

One in every three women has reported experiencing some form of sexual violence in her life according to a 2017 study by the CDC. The folks at Interact said it's a number it hopes the national conversation will change.

"We need to change the questions on the conversation from 'what was she wearing,' and 'what did she think was going to happen,' or 'why did she leave with him,' to how are we still experiencing this violence in our community," Durham said.