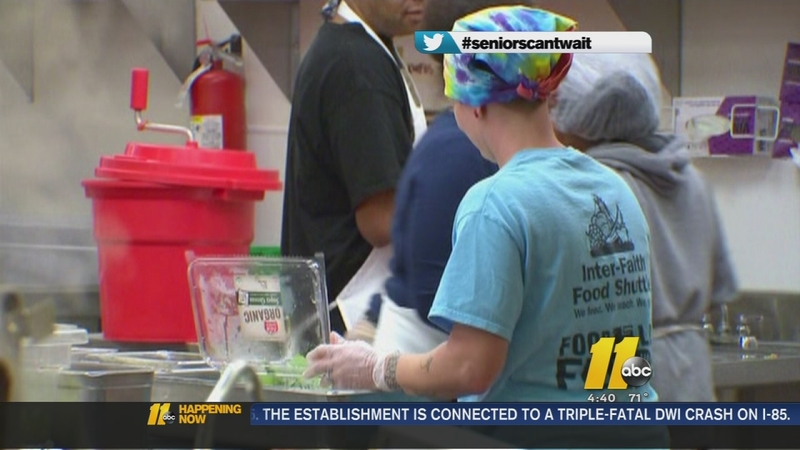 RALEIGH (WTVD) -- Meals on Wheels of Wake County has 213 people on its waiting list. The current wait time for new clients is about 7-8 weeks.

"Yesterday, we had three people who called," said Exec. Dir. Alan Winstead. "We are delivering more meals this year than we did last year and in previous years, but our demand keeps going up."

Winstead says his organization has what it needs to expand the program except funding to buy more meals. They're joining Meals on Wheels America's #SeniorsCantWait campaign to raise awareness about the growing number of seniors who are currently waiting.

"It's good!" said Ethel. We had to wait a good little while."

Like many seniors in the Meals on Wheels program, the couple depends mostly on outside care.

"Sometimes this may be their only true healthy meal for the day," said volunteer Diana Moore.

"Declining federal funding through the Older Americans Act, cuts in state and local grants, stagnant private funding and rising food, transportation and operational costs have all led to a growing gap between those served and those in need," said Erika Kelly, Chief Advocacy and Government Affairs Officer at Meals on Wheels America.

Decisions around federal funding levels for this fiscal year have yet to be determined, even though the President recently signed the Bipartisan Budget Act of 2015 into law, which resolved disputes about overarching federal spending levels and sets the budget framework for the next two years. Congress has between now and December 11 to reach an agreement and invest further into programs like Meals on Wheels.

Winstead and his staff are doing what they can to keep up with the growing demand for food locally and counting on more private donations over the holidays.

"People who can't get out and shop, who can't stand and prepare a meal, Meals on Wheels provides a critical, critical service," he said.

To learn how you can help Meals on Wheels of Wake County remove seniors from its waiting list, visit www.wakemow.org or call (919) 833-1749.