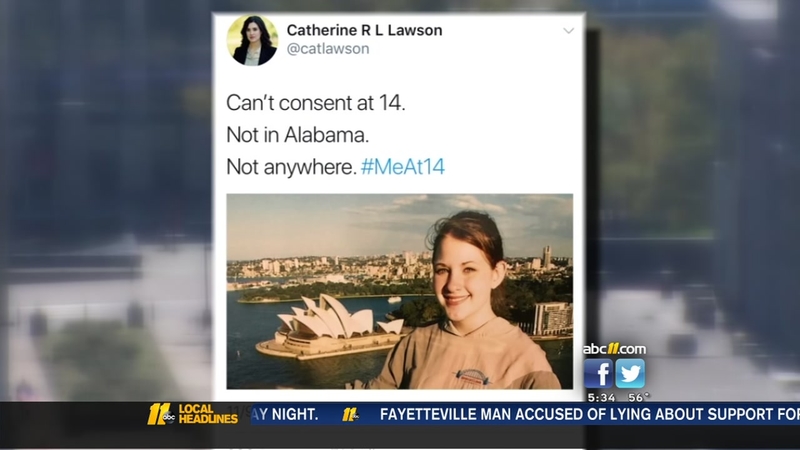 RALEIGH (WTVD) -- A Raleigh attorney is behind the #MeAt14 social media movement that's taking over your Twitter feed.

Moore is accused of having sexual contact with a 14-year-old girl in 1979 when he was a 32-year-old assistant district attorney.

The Washington Post first reported the accusations against Moore, adding that he also pursued relationships with three other teenage girls when he was in his 30s.

Lawson found an old photo of herself from her early teenage years and shared it, using the #MeAt14 to show why laws are in place to protect children and to tell victims of sexual abuse they're not alone and not to blame.

Can’t consent at 14.
Not in Alabama.
Not anywhere. #MeAt14 pic.twitter.com/AFUw1Ru4X2

"It's not you," Lawson said. "This wasn't your fault. You were preyed on. You didn't have the tools to defend yourself or to process what was happening."

Celebrities like Alyssa Milano have joined the movement, sharing old photos, and using the hashtag.

#MeAt14 I worshipped my brother. I loved my dog, Pucci. I loved OMD. I had Big hair. I was happy. I was innocent.

Lawson, a registered Republican, said when she saw people on Twitter and GOP leaders in Alabama trying to downplay the allegations, she couldn't stay silent.

"That was the response that bothered me, the notion that there are certain values that we're willing to trade in order to affirm a political affiliation," she said.

RELATED: Trump says needs to get back to U.S. 'to see what's happening' with Roy Moore

----------------------------------------
ABC11 has decided to slowly reduce the number of stories on the website that have a comments section. We believe very strongly that our audience should have an opportunity to discuss and debate events in our world, however, we have not been able to moderate the comments as well as we would like. Instead of hosting a platform that could allow a few loud and ugly voices to dominate a conversation, we want to encourage everyone to join us on our social media platforms and speak out there. Facebook: facebook.com/ABC11 Twitter: twitter.com/ABC11_WTVD
Report a correction or typo
Related topics:
raleighsexually assaulttrendingtwitterraleigh news
Copyright © 2022 WTVD-TV. All Rights Reserved.
TOP STORIES
Russia's claim of Mariupol's capture fuels concern for POWs
Firefighters called to two-alarm fire in Cary
Volunteers at Raleigh church package meals for people in need
Man charged in Hope Mills double murder
Some peanut butter recalled for potential salmonella
Smith, Raanta, Hurricanes top Rangers for 2-0 series lead
First formula flights from Europe to arrive this weekend
Show More
1 person in hospital after shooting overnight in Raleigh
Dog battles mountain lion to save owner's life
'Absolutely terrified' teen boy dies hours after 'sextortion' scam
Parents share mixed reactions over plans for boosters for children
Wake Schools bus driver charged with driving bus while impaired
More TOP STORIES News