KFSN
By and The Associated Press 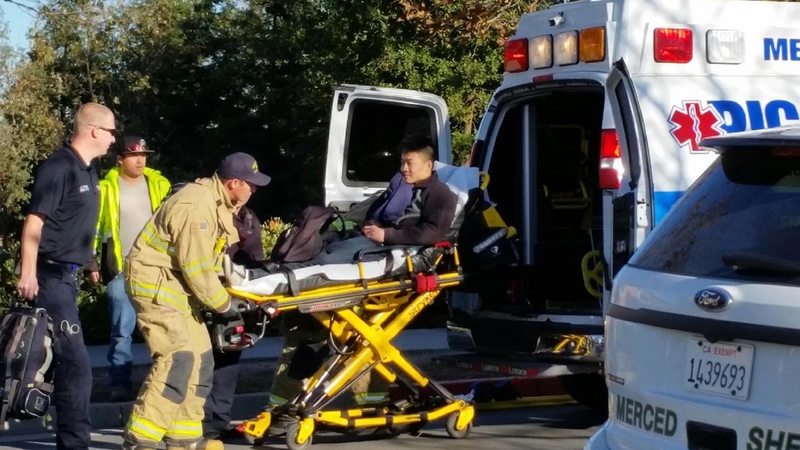 MERCED, Calif. -- An assailant stabbed five people as students headed to class at a rural university campus in central California before police shot and killed him, authorities said Wednesday.

All the victims attacked at the University of California, Merced, were conscious when paramedics reached them, Assistant Vice Chancellor Patti Waid said. Two of them were taken by helicopter to a hospital, but their conditions weren't immediately known, officials said.


Three of the victims had injuries that were minor enough for them to be treated on campus, Waid said. Campus officials say some, but not all, of the victims are students.

They provided no description of the assailant or a motive for the attack that occurred outside a building as students entered it to go to class shortly after 8 a.m. PST, Waid said.

Student Alex Lopez was heading to class when he realized something was wrong on campus.

"I was listening to a podcast, and there was a break in talking, and I just hear a gunshot," he said.

He said police and first responders flooded the scene.

"You see this stuff all over the news and stuff and you see it happen to all these other schools," but you don't expect it to happen at your school, said Lopez, 21.

The school with more than 6,600 students is about 120 miles south of Sacramento in the farm-rich San Joaquin Valley. The campus in the city of Merced opened a decade ago and is the newest college in the University of California system.

The school was erected in the middle of the state's farm belt in response to the burgeoning enrollment in the nine other University of California campuses. UC regents also felt the mainly agricultural region was unrepresented by higher education.

It is the first UC campus built since 1965, the university says on its website.