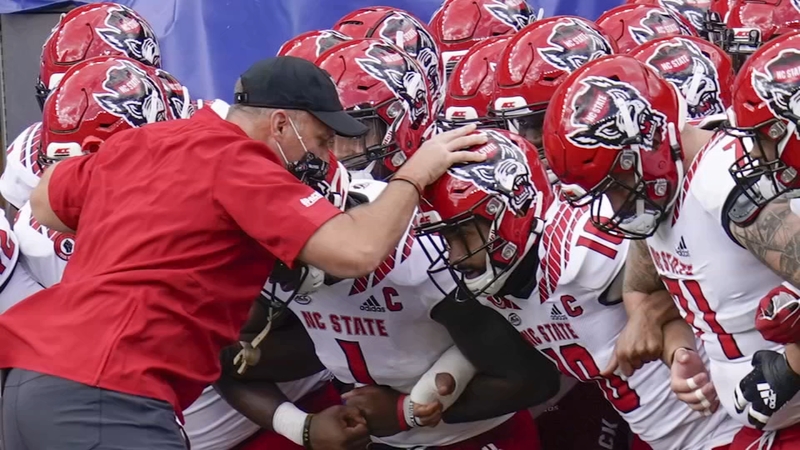 RALEIGH, N.C. (WTVD) -- They don't play often, just 15 times all-time, but Friday night at Carter-Finley Stadium has a chance to be a dandy. Both teams are coming off open weeks so they should be seeing vibrant versions of each other.

"Good personnel. Yes, there's a reason they're 5-1 and ranked third in the conference in scoring defense," Dave Doeren said earlier this week of the Hurricanes. "You know, it's not just because they're doing good things schematically, they've got good players. When you have 51 tackles for loss in six games, that's disruptive."

Miami head coach Manny Diaz began his coaching career as an assistant at NC State under Chuck Amato, so he's no stranger to the Wolfpack (4-2).

"I know their strength coach very well and know Dave Doeren is a defensive minded head coach," Diaz said "They're a very strong program, they're a very tough program. You just see when they hit people on contact, people go backwards. So our guys are ready for another challenge on the road."

In a weird anomaly, this will be the seventh time the Pack and Canes have played on a Friday, almost half of their all-time series and also the most Friday games that NC State has played against anyone.

Wolfpack defensive lineman Savion Jackson knows it won't be as wound up as when there's a full house but still expects a big game vibe.

"There's nothing like a full stadium at nighttime at Carter-Finley but, I mean, you still have that same feeling just playing in the nighttime lights, but nothing beats the full stadium mood," Jackson said. "But it doesn't matter whether there are fans, we'll still play the same way."

There's no secret what's most important when it comes to slowing down the Hurricanes attack. Quarterback D'Eriq King must be corralled.

"I feel like he's not as accurate as he is when he's out and running and stuff, so that's why we want to keep him in the pocket and rush him that way, not let him get loose so he can use his feet. That'd be the best way to go." Jackson said.

Diaz is also wary of the Wolfpack defense.

"There's a threat of maximum coverage and the threat of maximum pressure on every play," he said. "And one thing they've always done a really nice job with is they're not afraid to bring the house on first and 10 or second and 10 anywhere on the field."

Friday begins a string of three straight home games for the Pack and four of five to close the season. If they can manage a win vs. Miami, the chance is there to wrap up the schedule with some serious success. But first things first.

Offensive lineman Ikem Ekwonu is looking forward to the comforts of home.

"We know every team we face is going to be good but we just feel a lot better knowing that we can stay home," he said. "Having our families come to the games more easily is definitely a big plus."