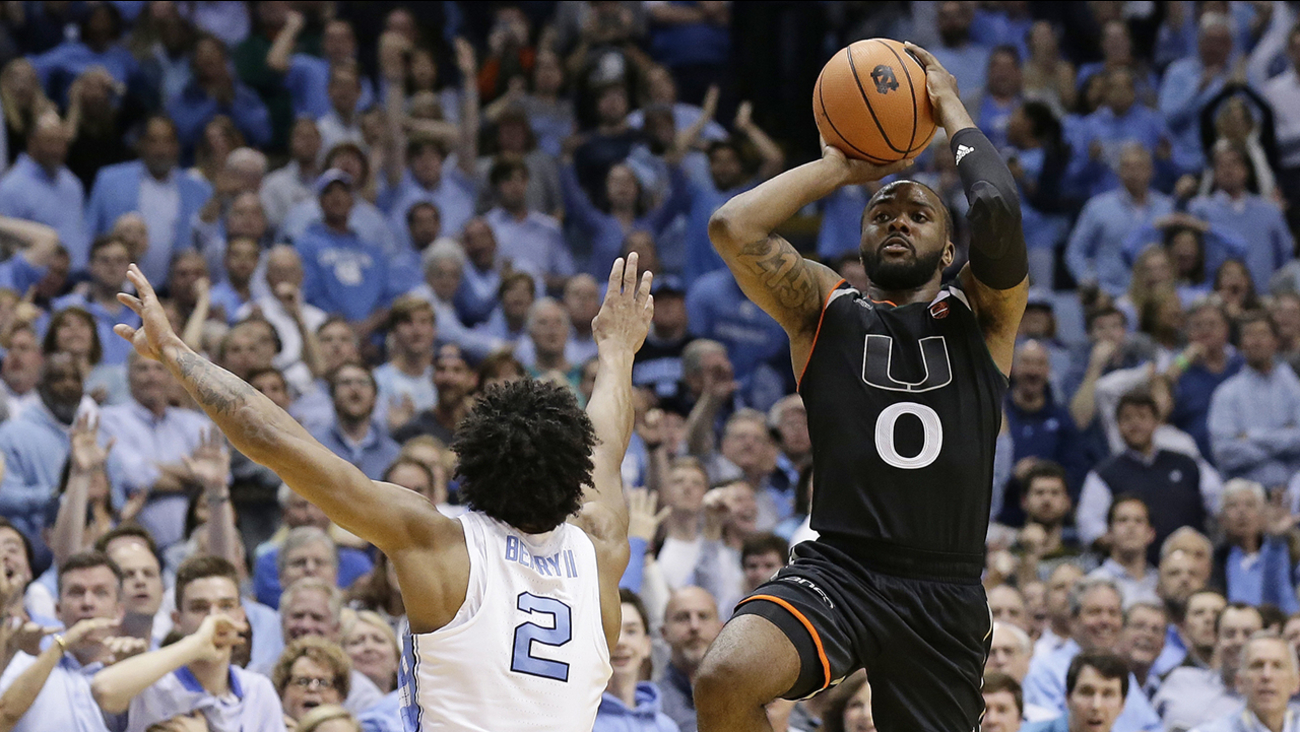 CHAPEL HILL, NC -- Ja'Quan Newton hit a runner from more than 30 feet away at the horn to help Miami upset No. 9 North Carolina 91-88 in a wild finish Tuesday night.

Here’s how the last 9 seconds play out. Berry hits the 3 followed by a Hurricanes dagger at the horn pic.twitter.com/XXVgKD5DOe

Newton's heave off his left foot came immediately after UNC's Joel Berry II hit a tough 3 of his own to tie the game with 4.1 seconds left. Miami pushed the ball upcourt for Newton's shot over Berry, then the Hurricanes immediately mobbed Newton near midcourt.

"When I was guarding Joel, he came down and hit a great shot," Newton said. "Soon as he hit the shot, I came around and I wanted the ball. ... I got it. I looked at the clock when I was dribbling upcourt and it said 3 seconds left.

Emotional Theo Pinson talking about his personality and a family dislike of Duke (of course) pic.twitter.com/yykRnuBMgp

Miami coach Jim Larranaga said he considered calling a timeout before the Hurricanes inbounded the ball. And as Larranaga gave his postgame comments, Newton stared at a nearby wall-mounted TV replaying his remarkable shot.

Larranaga said the final play ended up being simply: "Ja'Quan, score so we can win this game."

It capped a game that saw Miami (21-8, 10-7 Atlantic Coast Conference) squander a 16-point second-half lead, only to come up with a huge win with the ACC Tournament just a week away.

Joel Berry II did everything he could to rally UNC on senior night but his efforts were in vain against Miami on Tuesday night.

Berry matched his career high with 31 points for the Tar Heels (22-8, 11-6), who lost their final home game to snap a six-game winning streak.

Miami: The Hurricanes had won their past two games by a combined four points, including a comeback from 14 down to beat Boston College on a last-second 3-pointer on Saturday to reach their sixth 20-win season in seven seasons under Jim Larranaga. This one fit right in with those - and truthfully topped them.

UNC: The Tar Heels entered this one trying to close out a perfect February, which included emotional rivalry wins against Duke and North Carolina State as well as road wins at Louisville and Syracuse. But they struggled for stops on a night when they shot 54 percent, and they also went just 13 for 20 at the line - including two to tie it in the final minutes before Berry's final basket.