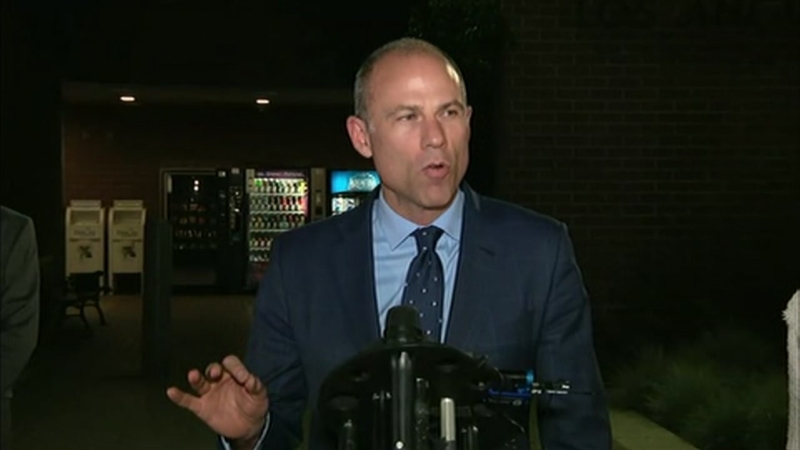 The victim in the case had visible injuries, according to Officer Tony Im, a police spokesman. Avenatti slammed the allegation as "completely bogus" in a statement released by his law firm.

Avenatti was being held on $50,000 bail, Im said. He was arrested around 2 p.m. Wednesday on the same block where he lives in a skyscraper apartment.

He was expected to be released on bail Wednesday evening.

Police had responded to a domestic violence incident Tuesday and took a report. Police declined to provide any details about the victim, including the victim's relationship to Avenatti.

"I wish to thank the hard working men and woman of the LAPD for their professionalism, they were only doing their jobs in light of the completely bogus allegations against me," Avenatti said in a statement released through his law firm. "I have never been physically abusive in my life nor was I last night. Any accusations to the contrary are fabricated and meant to do harm to my reputation. I look forward to being fully exonerated."

However, Lisa Storie-Avenatti, who married Michael Avenatti in 2011, told ABC News that there was no incident involving her and she hadn't seen Avenatti for months.

Her attorney released a statement saying there were never any incidents of domestic violence in their relationship and that his wife never knew him to be physically violent toward anyone.

Avenatti's first wife, Christine Avenatti Carlin, also tweeted: "I have known @MichaelAvenatti for over 26 years we met when he was 21 years old and we were married for 13 years. Michael has ALWAYS been a kind loving father to our two daughters and husband to me. He has NEVER been abusive to me or anyone else. He is a good man."

Avenatti, who has said he's mulling a 2020 presidential run, became famous as Daniels' attorney and pursued the president and those close to him relentlessly for months, taunting Trump in interviews and baiting him and his attorneys in tweets.

Daniels, whose real name is Stephanie Clifford, has said she had an affair with Trump in 2006 and has sued to invalidate the confidentiality agreement she signed days before the 2016 presidential election that prevents her discussing it. She also sued Trump and his personal attorney, Michael Cohen, alleging defamation.
The abrasive Avenatti also got involved in the battle over Brett Kavanaugh's nomination to the U.S. Supreme Court when he represented a client who alleged inappropriate sexual conduct by the nominee.

The Vermont Democratic Party canceled events planned for Friday and Saturday, where Avenatti was scheduled to speak and is refunding ticket sales.

Stormy Daniels' attorney Michael Avenatti said Thursday that he is representing three other women who claim they were paid by Donald Trump, AMI and Michael Cohen to keep quiet.