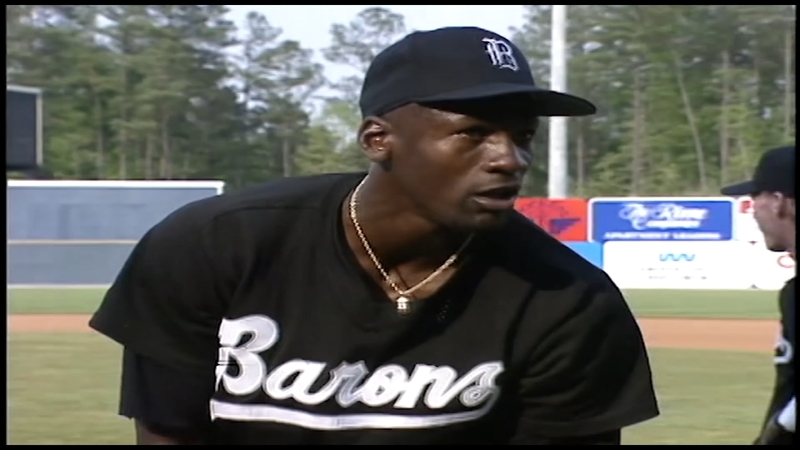 WILMINGTON, N.C. (WTVD) -- Back in 1994, UNC-Wilmington head baseball coach Randy Hood was just a minor league prospect trying to work his way up in the Chicago White Sox organization and then, for one summer, his world was turned on its side.

"And then about a week to go (in spring training), we basically kind of found out who was going to be on that team and then it was kind of a reality that, oh my gosh, we're getting ready to start a minor league season with Michael Jordan," Hood recounted Tuesday.

Both Hood and Jordan grew up in the same part of the state, in the same high school conference, so Hood was long acquainted with the legend. In fact, he was a huge fan.

"When I was at Campbell (university), I'd make sure I get done with all my homework, practice and everything and be ready to watch WGN at seven o'clock every night, watch the Bulls play," Hood said.

That dynamic though quickly changed as teammates. No one ever forgot that MJ was MJ, but the basketball legend wanted to earn his place on the diamond.

"He knew he had to kind of work his way in and gain some assurance and confidence from his teammates that 'hey I'm here to work and try to be the best baseball player I can be,'" Hood said.

It was like being on a rocket ship. Sellouts every game home and away, and 50-100 media members always there from across the world. Minor league life is usually far from glamorous but for six months, everything was different.

"We go to Jacksonville, Florida, and he gets a group of us on Sawgrass and we play the TPC course one morning, and they shut down nine holes while we play golf at one of the nicest golf courses in the world." Hood said, still seemingly incredulous telling the story in 2020.

While his Birmingham Baron teammates generally didn't ask Jordan about basketball, there were pickup games at the apartment complex where most of the players lived. Word usually got out quickly and soon there'd be 300-400 people surrounding the fence, watching.

"Of course, every one of us wanted to be a part of that because, you know, you're playing with the greatest basketball player in the world," Hood said. "I was happy to get dunked on. He'd take over the game when his team was down and you just kind of let him go and there's nothing you can do."

Hood also recalled how he "made the mistake" of wearing New Balances to the first game and that was soon rectified.

"I caught a glimpse of a Nike box sitting in my locker and I said, 'what's that?' and I went over there and opened it up and it was a pair of powder-blue Jordan 9s," Hood said. "I kind of looked over toward his locker and he was just shaking his head and he just said, 'hey, don't ever wear those New Balances again; these are what you need to wear,' and I was like, 'all right, pretty cool!'"

Hood still has those shoes.

He said he and his Baron teammates haven't talked much about that crazy summer since, choosing to revel in the memories.

"It was so cool during the time, that I didn't ask him for an autograph until the last day of the baseball season," Hood said. "It was neat. It was weird. It was just a whole different scenario that you couldn't even imagine at the time."

Hood and Jordan both played right field for the Barons. Since the sellout crowds were always there to see Jordan, on the dates when MJ took an off day and Hood filled in, he remembers getting mercilessly booed.